The work can be socially responsible, but not sustainable. It can be meticulously researched, but not insightful. It can be extraordinarily gorgeous in its production values, but vapid. It can illuminate deep investment in local communities, only matched by the vast sums lavished on advertising said investments for brand lift.

A recent example is a brand advertising campaign currently running for CITGO. It's a perfect example of social offsetting -- focusing on the positive impact on local community, making an investment in social responsibility on a day-to-day basis, all the while ignoring the long-term expense owed to the world at large regarding the product that they sell. 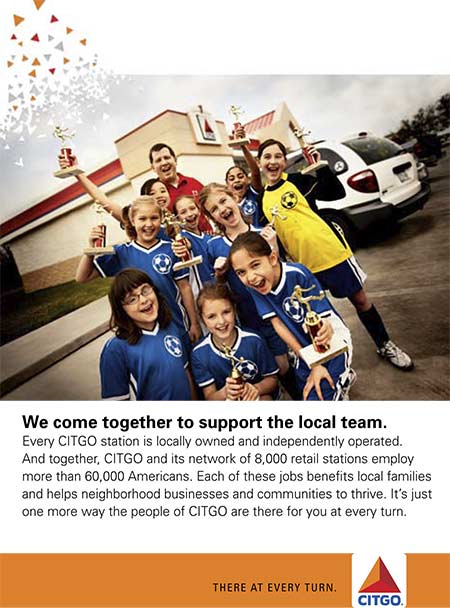 Social Offsetting is a Risky Maneuver

Why is it that our oil industry, which is one of the most profitable corporate ventures in today's economy, is wasting gallons of money on incredibly dumb advertising instead of investing in our increased independence from petroleum products? This is a rhetorical question. We know the answer: employees, shareholders, political stakeholders, and franchises. Incremental profits and dividends. Short-term and long-term gains.

The greenwashing race has been on since the heady days of the BP rebrand, and long enough for the inevitable backlash to crash down on unsuspecting corporations, drag them through the muck, and gracefully recede to leave their gasping corpses on the beach for all to see. Gracefully rich corpses, mind you.

What concerns me now, however, is that oil companies with little or no "green story" are pouring money and thought into tastefully executed ad campaigns that attempt to either immunize customers from the increased hypocrisy regarding oil use in America, or shift our focus onto immediate human needs and turn a somewhat blind eye towards the future impact of the use of their products.

Looking at these dumb ads can be like reading a terrible creative brief. Take the ad which I've included here from CITGO.

Imagined creative brief: Companies such as Chevron are touting figures that point to their investment in alternative energy. Customers are angrier than ever about rising gas costs. How can we increase brand lift for Citgo and potentially increase consumption of our gasoline without a strong social responsibility/alternative fuels message?

Solution: Let's focus on the human condition. Let's make it personal. It's more important than ever to foster brand loyalty towards a specific brand of gas, since it's pumped by a local gas station near your home. It's not about the price of the gas. It's about supporting local business and communities and the jobs in this unstable economy that are preserved. It's about the people who man the pumps.

This position would be fabulous... if it really meant anything. By reading the copy in this ad, I learned a number of things, but none of them created a real point of differentiation against other gas stations, or other local franchises, for that matter.

This well-designed, well-executed ad has only served the purpose of making CITGO look like a company that doesn't give a damn about the long-term effects of their products on society. The sale of their products benefits the owners of their franchises and their shareholders. Bully to them. But it isn't sustainable. It doesn't hold up against their competition, who are hammering on sustainability hard. CITGO just looks like they're being facile. And it never helps when the guy who owns your business also happens to be a head of state that loves to hammer on George W. Bush (which we Democrats do anyways, but we usually aren't hanging out with Fidel Castro).

CITGO thinks we all believe oil companies (may) own our corner gas stations, and the employees that work there are shills for the man. Just like at 7-11. And McDonalds. In fact, they assume we don't know that many major corporations that sell products sourced globally are franchises or licensees. Which would make CITGO just like pretty much any other corporation that sells a parity product. They have to franchise them. They don't want to dirty their hands with the actual effort managing thousands of local retail locations would require, including becoming good local citizens on the ground level.

Since the oil industry is doing so well, it's helping to keep people employed and prosperous in a down economy. This is the same case for any scarce resource, and while we haven't reached peak oil yet, they're in the business of putting us all out of business. Again, the short-term view rears its head.

These employees have money to support local communities, since they're doing so well. Ah... just cause they're doing well doesn't mean they're supporting local communities. Don't assume that everyone that owns a CITGO station is a good samaritan, unless it's required as part of their corporate charter (which I wouldn't be surprised if it was.) But this is a small point. You're still selling gas. Are you really being telling me something in this ad I didn't know already?

What really gets my goat, however, is that I spotted the CITGO ad in Harper's, where you practically need a Master's Degree to read some of the book reviews. These well-educated readers are going to see this ad, think about it for two minutes, and shred it with their intellect like a hot knife through Earth Balance buttery spread. Especially since the editors at Harper's have focused on peak oil issues and energy independence as a major topic of interest for some time now. Did your media planner read the magazine before making the buy? Did your media planner think that 97% of Harper's readers would know that CITGO is effectively owned by Hugo Chavez? (Actually, they might score some points there with those wacky Marxist college professors.)

Yes, it helps when you place your dumb ads in magazines where people will recognize just how dumb they are. Now come up with something better that doesn't belittle the real situation we're in.

I'm waiting with bated breath for the ad campaign from McDonald's about how they're supporting local businesses, as well as farms and slaughterhouses, and by extension making the world a better place.

The Right Kind of Transparency

Clearly, if we have cars, we need some kind of fuel. I totally understand that. I have an old Corolla that I drive to client meetings and band practice. I can't be so much of a hypocrite that I can't understand that I'm contributing to the problem. In fact, I'm educated enough to know that if I could reduce this argument to a simple answer, we wouldn't be having it. It's a wicked problem that will take hundreds of years to unravel.

However, I am mindful enough to think of the impact of my driving four miles to work, and try to minimize it by bussing or biking. I am investing time, energy, and attention into ventures that are looking to get us out of the petroleum game, both in making lifestyle choices (such as buying very local foods), in choosing socially responsible investment vehicles, and in having been a vegetarian for 13 years.

And because of this, and because the biodiesel movement is fraught with all sorts of risks and perils, I actually appreciate it when companies such as Chevron point out that they've invested $1B in alternative energy and are attempting to migrate their business into that as a long term venture. $1B is a drop in the bucket compared to their profit margin last year, and their marketing has its own hypocrisies that piss me off and will be mentioned in a later post. But I appreciate it when they don't skirt around the fact that we need oil now, but are trying to sell me a future with reduced independence. This "putting ourselves out of business" argument holds a lot more weight for people who are mindful about their footprint.

Now, if you've made it this far through this unintentional screed, you're going to be very interested in what follows. (And I should disclose that I wrote all of the above before I went to the CITGO Web site.)

For some reason, CITGO actually pushed to the public not only all of the TV and print ads, but also the media schedules for their ongoing campaign, their top-level market research, their audience segmentation and personas. I think it's pretty rare when a corporation puts live to the viewing public the thinking that supports their advertising at a strategic level. And there's a good reason why we don't expose this thinking to our audience. It makes corporations look ruthless, manipulative, and reductive. In many ways, that summarizes intelligently executed marketing strategy. However, seeing the wizard behind the curtain has a way of making the puppet show look mighty flimsy.

Thanks to CITGO, I know that I fall into the Progressive Activist category when it comes to their marketing. They've created a lovely logo to personify my recycling-junkie ways. They've told me when they'll be reaching me with these ads. They have big plans to educate the masses about their efforts. They've identified the issues of greatest importance to me and my corporate fellows, such as Environmental Stewardship, Local Ownership, and Social Development. Yes, Environmental Stewardship is one of eight pillars of their positioning, but they aren't talking about reducing dependence on oil. After all, it says on their Web site that "gasoline is still cheaper than bottled water" with regard to how much value they can squeeze out of every ounce of crude.

Yes, it is quite embarrassing to tell your customers on a page advertised on their corporate site exactly how you're going to convince them that you're not all that bad. Then again, look at poor Barkley out of Kansas City. They couldn't stem the PR nightmare and the flood of money that gushed out when 7-Eleven pulled out of working with CITGO in 2,100 stations due to its ties to Venezuela and Hugo Chavez. Even local gas stations are doing the same today. CITGO is clearly looking for a way to purchase themselves out of a rock-bottom brand position with the American public.

And they've continued that downward trend beautifully by showing me just how much they consider me part of their future. CITGO's exposure to the public of their market research and segmentation plans, how they are working to shape my opinions to like them more, and the lengths they want to go to do so in public, bald language, is both arrogant and galling.

Don't tell me how you're going to change my mind to like you more -- especially when you didn't include a Web site URL or other call to action in your ad to find out more information. Clearly, you didn't want me to look. I did. And look what I found: Beautifully designed, tastefully photographed, well-written ads calculated in a gambit to "change perceptions about CITGO among opinion leaders across the country," targeted at influentials like myself.

Guess what. You succeeded. I now have an even lower opinion of CITGO.

And I also have a parting request: Invest your advertising money in something more worthwhile, like these local communities that you love to tell me that you support.