The Pitfalls of Marketing Social Responsibility, Part 2 of 4 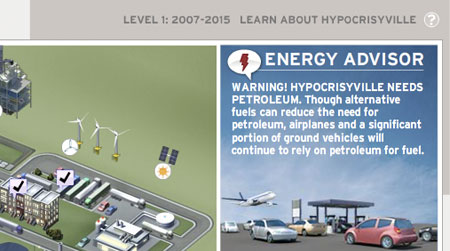 Read Part 1. This new post talks about the following rule:

2) Don't have anything to hide. It just makes for more hypocrisy.

Have you ever taken a trip to the fine city of Energyville?

Chevron has taken it upon themselves to design a game that shows just how hard it is to keep electricity flowing to the nation's cities without traditional fossil fuels in the mix. And you know what? They're completely right. It would be hypocritical of me to think that within the next two weeks, let alone ten years, we're going to be able to generate enough energy from alternative energy sources to create a major offset of fossil fuels in the United States to power our cities, cars, and planes.

That said, Chevron is hypocritical to think that a simple game modeled off Sim City and designed for smarty-pants liberals who listen to NPR and wear corduroy is going to change my impression of their company and business model. Yes, they have invested billions over the past half-decade into alternative energy sources--but I know that's a mere fraction of the profit they've been raking in from this multi-year spike in oil prices. It is not in their corporate interest to shift from their main source of revenue (oil) to envisioning a future tied up in alternative energy sources. They have to keep the pumps running, putting out other fires, and paying out those serious dividend checks.

For the American populace and the Democratic government, Chevron has an infinite distance to travel to be seen as a good citizen. It was never part of the core DNA of the Chevron brand to be promoting "Human Energy" -- that was an evolution required by a hardcore assault by the Democratic government that's just the tip of the iceberg. Chevron's "Will You Join Us?" microsite is just an attempt to soften the blow of reality and make the public aware of just how morally fraught their position is. For those who don't see the whole picture, they have succeed, but at what cost? Chevron is part of a web of hypocrisy contingent on real change across multiple industries. Every time they report record profits for their shareholders, they look more like a hypocrite.

So, how can Chevron escape out of this marketing death spiral?

By following this corollary to the second law:

Humility and honesty is the only antidote to hypocrisy.

Not in a clever video game, mind you -- humility in a company-wide acknowledgment of the real impact oil has on the world at large and the direct steps they're going to take over the next 50 years to evolve their business out of oil and force other industries, such as car and airplane manufacturers, to focus their energy on alternative fuel sources. Articulate who you want to be without oil and people will respect you for your honesty and vision -- plus, you'll make more impact than all the companies like TerraPass that are trying to aggregate people's individual contributions into a motivator for real change. That would be a reflection of a true commitment to sustainability.

A similar strategy to Chevron has recently been taken by Chevrolet to focus on how they're developing a range of fuel solutions for their vehicles. This kind of marketing is just primed for a backlash, however, as it doesn't show true humility about how they'd like to get into the zero-pollution game with all of their car lines. And if Chevrolet doesn't pay off their vision with measurable results, they will always be seen as the villain. And it doesn't help that their primary ad image when this campaign broke was a boy hugging a tree. Um, right.

It'd be easier for Chevron and Chevrolet to spin off their green businesses, get them successful, then fold their old, tainted brands out of business than to reinvent their brands as they exist today.

Maybe I'm the one being naive... but it seems from this flurry of marketing activity, the oil game can't change unless you get out of oil. The whole position of "Saying No to No" that I saw in a recent Shell ad (that ripped off a photo that was on the cover of the CommArts photo annual and the New York Times Magazine) is saying to avoid being hypocritical. That's even more meaningful coming from an oil company, right?