Save the Brands! First Up: WaMu 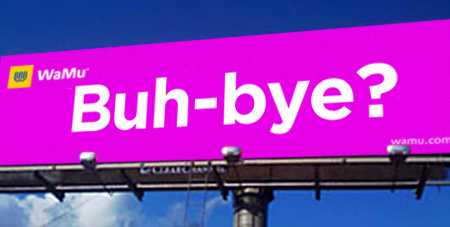 [EDIT, 12/1/08: They announced today that the WaMu brand will be retired and replaced with Chase, so this post is pretty moot.]

There are many sad things about the distress that's currently working its way through our financial system: the loss of jobs for many of our fellow Americans, the threat of implosion of our securities market, the billions of dollars in mortgage (and shareholder) value evaporating like so much smoke from an unfiltered cigarette.

In the aftermath of this threat of financial armageddon in the United States, where none of us know where to go and whom to trust, the question -- painful as it is -- must be asked: who will save the brands?

That's right. With the seizure of my hometown's Washington Mutual, I'm seeing a dark period for some of our nation's top brands.

WaMu had invested countless billions of dollars to paint a perky, friendly face on money. The WaMu marketing machine had been laser-focused on less-sophisticated, higher-risk consumers, putting forth a friendly facade that was dubbed by their former CEO, Kerry Killinger, as the “Wal-Mart of Banking."

If we've learned anything from Wal-Mart, it's that it isn't what your name is, but the following: 1) what you sell, 2) how you sell it, and 3) how you get what you sell to the place where you sell it. Banks are always good at #1 and #3. They take your money, they lend you money, and they give you your money when you need it. #2 is where the magic happens.

So, how did WaMu sell it? WaMu's core offering, from the banking side, has always been about making basic services free, then hyping the quality of service that you'd receive in the branch and online. Underneath that promise of "Free Checking!" and "More Human Interest" and "Another Revolution in Banking" and "The WaMu Way" was a very deep portfolio of shaky mortgages. These products were serviced through their lending arm, which was very adept at hoovering up mortgages from other banks. The mortgage interest, as well as heavy service fees on low- or no-cost accounts, were two of the major sources of revenue for their banking services.

You can get that top-line summary from reading the press on WaMu and sampling some of their campaigns over the years, but I'd like to throw a different perspective in here.

I had serviced them as a creative for a few years while at a large marketing firm, and after eating and sleeping with them as a client full-time for a year -- I mean that figuratively, of course -- I can tell you that this whole "seized and sold by the government" thing may not destroy their brand.

A caveat, however. JPMorganChase may choose to swallow the brand up wholesale and remake them in their own image, but there's also a counter-argument as to why the WaMu name and ethos should stick around. But this would take real risk, and I assume JPMorganChase has already taken on plenty.

For the moment, indulge me in this little dialogue I've concocted:

WaMu. Sir. I'm assuming no one has called you sir until now, but I'm testing it out, so you can get used to it.

Instead of being that happy-go-lucky, a little quirky, PG-13-movie-loving knucklehead we so love and admire, we need you to, well, grow up. Just a little. We need you to acknowledge the reality of what's happened over the past few years between you and I. Yes, I can forgive you for the college years, the dark nights of the soul characterized by the barbaric yawp of "Whoo hoo!" that we could hear from your frat house, where the parties seemed to be endless and the promise of champagne was always buzzing through the thronging crowd.

The sad truth is, those days are over. You've failed out of school -- and at the ripe old age of 119, more or less. Now is the time to forge on, with a sense of optimism, but no longer with that boyish, devil-can-care attitude that carried me through many a night of balancing my checkbook. No, sir. I want to see the scars on your knuckles, as you run them through your sandy blonde hair. I want to hear you speak in a tone of voice that's two notches below sassy. I want you to say the following:

"We've been through some rough times, old friend, and now we can move on to a new phase in our relationship. One where we can whisper real secrets into our ears instead of sweet nothings."

"And the first thing I want to share with you, David, is that I made a big mistake. I didn't listen to you, way back when you closed your account with us because we held your $260 cash deposit for 7 days before crediting it to your account, causing you to bounce two checks, and waive the fees. I didn't try to stop you from closing that account, or stop sending you mail about starting a mortgage with us. I didn't treat your friends very well in their mortgages with us, and many of them refinanced with other providers because we kept losing their mortgage payments and threatening them with foreclosure."

"All of that is in the past now. I've learned my lesson now. No more commercials about day-old sushi and bald men that dream they've grown hair and banks that treat people like cogs in a gigantic machine. From now on, I will put your money where my mouth is. I will treat you with respect and dignity for banking with me, and only spent a small portion of my free time wallowing in base humor to gain people's attention about my Free Checking product. The rest of the time will be focused on your needs, citizen of Seattle. You have my word."

You may consider this a cheap shot. There are billions of dollars and thousands of jobs at stake here. I have friends that work at WaMu whom I want to see happily employed. Our local economy hinges WaMu, which is a cornerstone bank of the Pacific Northwest.

But I've spent enough time with the WaMu brand, and seen the level of thought that goes into its expression through their marketing and advertising, to see that it has a reasonable facsimile of a human voice beneath all that posturing. It's just yearning to come out in a more mature expression, and in a way that can bring a human face to a ruined corporation. Sure, in the past few years, that WaMu brand personality has been trampled and stomped all over, and now the brand will likely be kicked to the curb. But at least let it have its last moment in the limelight, singing its sad song.

So I say, friends, that we allow WaMu its chance at redemption. Much like our Uncle Fred, who has seen his life destroyed by addiction and is now going through his 12-step recovery, WaMu has a chance to heal its wounds, and our own.

Whether this will happen has yet to be seen... but I'm idealistic enough of an American to dream that we could try to afford a teaspoonful of grace to a failed banking institution with a legacy of funny ads.

That's more than we can say for those other banks out there that are, well, banks.

Hate to break your little bubble but you can count down the months before you will stop seeing the "brand" WaMu. First as you said the name is awful and that is one reason for "Whoo hoo". But everything else Is on the table and will be evaluated by the folks that were originally Bank One (the one in Columbus, Ohio with the top brass in Chicago). The original Chase Manhattan operation in New Yoke was dismantled and all functions for the retail banking taken over by the Bank One folks in Columbus and Chicago. Chase has already said that this will happen and the organization announcement of the top executives were released on October 2. There will be some of the retail banking folks left for awhile in Seattle to pump their brains and see who wants to move to Columbus or Chicago. Their is no one left from the original retail Chase Manhattan in NYC. Before that when Bank One acquired First Chicago NBD and moved their headquarters to Chicago from Columbus the First Chicago NBD marketing, products, and computer systems were integrated into the Bank One counterparts. Later when Jamie Dimon took over he brought all IT in house in new facilities in Chicago. We all had to switch to new Bank One accounts, "products", (the account number stayed the same) that were the closest to what we already had. Our monthly statements (and yours soon) started coming from Baton Rouge, Louisiana where Bank One had just previously purchase a large bank. Since WaMu is fairly good sized compared to Chase some operations may end up as part of Chase. Bank One kept the excellent Elgin, Illinois customer service center while closing a Long Island, New York facility. They also kept Valley National Bank's Tempe, Arizona customer facility when that bank was purchased by Bank One earlier. Also the Chase Manhattan credit card operations were also dismantled and integrated into what was Bank One's First USA now Chase Bank USA. But the colorful branches and some of the quirky ways of doing business at the branches has a high likelihood of filtering down to the existing Chase branches. So what WaMU will really become is another part of Bank One. And Seattle will lose positions just like Chicago and New York lost. But they might gain some others. It really depends on how they perform now. Thus the ad copy may not be unneeded Butt licking after all. They have just completed interior brightening that looks like they had already looked over their shoulder to WaMu especially here in Chicago. And the national commercials and color schemes may just be coming from Seattle. But make no mistake, their will be one "brand" with one national commercial campaign and it won't have the tag line "Whoo hoo".