Home Archives Profile Subscribe
Concepting: Why You Should Foster a Collaborative Practice
What Are You Really Good At? 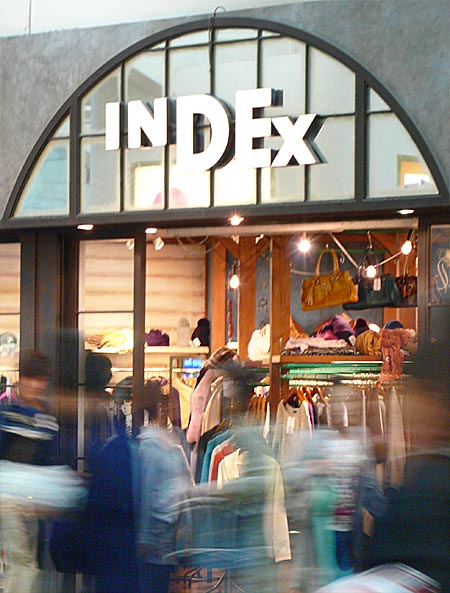 I was strolling through the mall above Shibuya Station in Tokyo when I took this photograph. This was not the first time I had seen this logo, in more ways than one.

Index is a chain of woman's clothing stores in Japan. Two days prior, while in Himeji, I had seen the same logo outside a small arcade of shops. There are all sorts of small stores and products I saw around Japan that played homage to, or playfully lifted elements from, beloved American logos, and I had assumed this was a small-town store riffing off one of the most highly known international brands. But no: this was a national chain, in a global market where FedEx had a decent presence, whose branding was a clear theft.

This kind of situation doesn't really hit home for most designers until they see their work reproduced in the wild. Then there's this weird admixture of flattery -- "Wow, they must have really liked my work" -- with the following contradictory thought: "Couldn't they think of something more appropriate for their company?" Stealing a logo says that your brand doesn't have its own unique spirit. Sure, you could also argue that you can't own an arrow denoted as white space between an "E" and an "x", but when you use the same font, the jig is up. You're busted.

Some of my bandmates work at an intellectual property law firm, where they deal with these sorts of issues all the time. You send the infringing company a letter outlining the infringement. if they ignore it, you send them another letter. Then, after a few more warnings and threats, you subpoena them, haul them into court, and duke it out with your lawyers.

This is very easy process for a designer or company to do, as long as you have two million dollars, unlimited time and energy to devote to the effort, and a willingness to risk that even after the trial, you won't see a cent from winning your case.

I sent FedEx Media Relations an email with this photograph asking how they handle such cases, but they haven't responded for comment.

Trademark law is construed as a means for protecting consumers so that they are not mislead regarding the origin of certain goods or services (and other aspects of marks such as truthfulness).

To some degree it's also a deterrent of unfair competition.

In the example you showed, however, in no way a consumer (or even "a moron in a hurry") would think that the "index" store had any connection with "fedex". Or that the clothes were being sold by "fedex".

From an unfair competition point of view, there is no competition between the "index" chain and "fedex". One sells clothes. The other provides express delivery (and other) services.

These products and services aren't sold to the same customers (in the same context), or in the same place. They aren't used together. Neither are they usually provided and sold by the same company. Etc.

I.e There is no "likelihood of confusion".

The "white space arrow" wouldn't be, in the slightest, a compelling argument before any judge. At least on the grounds stated here.

In some countries and courts, however, strange decisions, or some more ample rights can and have been granted. Even in these cases, I wouldn't think the "white space arrow" argument would be enough to prohibit the use of the "index" mark.

I think you're looking at the "index" mark with the eyes of a designer (nothing wrong with that :-), which surely sees the world in a different way.

But if marks were dealt in such a way, at least there would be much less available marks for use and registration. And plenty of unintended similarities would be forbidden and punishable (lawyers like that), even if no unfair competition or likelihood of confusion were in place.

I totally agree with you... From a legal perspective, this would be a long, painful, expensive fight over something that's not definsible and not really a direct business conflict. It's not like DHL stole the FedEx mark in Japan. That would just be... well... silly. :)

However, from a designer's perspective, this kind of logo theft is tied to your level of professionalism. Let's say that you called me up and wanted me to hire you to do some logo designs for a national brand. I look at your portfolio and see this "Index" mark. What does that say about your work, your stance on what makes a compelling brand, and the clients you have worked for? As I'd noted, there's all sorts of homages all over Japan to classic American brands, so this "Index" mark was somewhat par for the course or "clever". But if you're just taking a mark and adding a few new letters to it for the sake of fashion, are you really making your best work?

Designers struggle with these sorts of issues all the time, being inspired by other designs they see in the wild but trying not to blatantly rip off content.