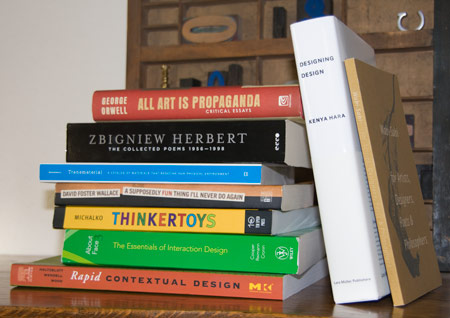 Perennially, I'll share what books are stacked up on my desk here at ChangeOrder. I can vouch for a few of these tomes, as I'm currently re-reading them, while others are new acquisitions that I'm eagerly itching to curl up with over the holiday.

Let's start with the two books leaning on the stack:

by Kenya Hara: Kenya is currently the art director for MUJI and a force of nature in the Japanese design community. I actually saw this book at MUJI while I was in Tokyo (in Japanese) and was thrilled to find an English translation through Lars Muller Publishers. So far, I've read a chapter, and it's extraordinary in its poetry and intelligence. Quote: "The whole world looks different if you just put your chin in your hand and think. There are an unlimited number of ways of thinking and perceiving. In my understanding, to design is to intentionally apply to ordinary objects, phenomena and communication the essence of these innumerable ways of thinking and perceiving."

by Leonard Koren. The author was the first Western writer to articulate in English a way to intellectually understand the Japanese ideal of wabi sabi. This deceptively deep, slender tome may change the way you view art forever. I read this book every year, sometimes twice. Quote: "Simplicity is at the core of all things wabi-sabi. Nothingness, of course, is the ultimate simplicity. But before and after nothingness, simplicity is not so simple."

From top to bottom on the horizontal stack:

All Art Is Propaganda: Critical Essays

by George Orwell. One of the essayists that I'm indebted to. This new collection is incendiary and at times a little difficult to decipher as he's referencing many of-the-moment cultural details that we just aren't literate about -- without hitting up Wikipedia, that is. There is much to chew on and digest here, whether you agree with his point of view or not. Quote: "The fact that when you suggest finding out what the common man is like, and approaching him accordingly, you are either accused of being an intellectual snob who wants to 'talk down to' the masses, or else expected of plotting to establish an English Gestapo, shows how sluggishly ninteenth-century our notion of democracy has remained." (from "Propaganda and Democratic Speech")

by Zbigniew Herbert. Ever since I picked up a slender volume of poems from Herbert about 10 years ago, Mr. Cogito, I've been struck by his sly intelligence and insight. He died many years ago, but Ecco Press has finally put out an affordable paperback edition of his complete work, lovingly translated into English by Alissa Valles. I just adore the cover. Quote from "Prose Poems": "Harpsichord: In fact it is a cupboard made of walnut in a black frame. You might think that it is used to keep yellowing letters, Gypsy coins, and ribbons -- whereas there's nothing but a cuckoo entangled in a thicket of silver leaves."

Transmaterial: A Catalog of Materials That Redefine our Physical Environment

edited by Blaine Brownell. This tome from Princeton Architectural Press is a directory of unique and novel materials that can be used in both the building of physical structures and in industrial designs. This is the kind of book that sits on your shelf for a year or two, forlorn, until you get hired for a wayfinding project or to help support an interior design firm, and suddenly this tome is like gold. There's already a second volume out there.

by David Foster Wallace. Probably the most tragic loss that American literature has seen this year, DFW was a hyperliterate, humane juggernaut of a writer, with many novels, short stories, and essays to his credit. This book, to me, still stands as his crowning achievement, a delicious blend of observation, wordplay, and empathy. His second collection of essays, Consider the Lobster

, is also quite good. Quote from the stunning title essay, where he was paid to write about the experience of taking a cruise: "I have seen camcorders that practically required a dolly; I've seen fluorescent luggage and fluorescent sunglasses and fluorescent pince-nez and over twenty different makes of rubber thong. I have heard steel drums and eaten conch fritters and watched a woman in silver lame projectile-vomit inside a glass elevator. I have pointed rhythmically at the ceiling to the 2:4 beat of the exact same disco music I hated pointing at the ceiling to in 1977."

Thinkertoys: A Handbook of Creative-Thinking Techniques

by Michael Michalko. Often, designers are asked to come in and help lead clients through creative explorations. Whenever that happens, I reach for either the IDEO Method Cards

or this book. It's full of tons of little exercises and thought models that help people who feel they "aren't creative." At times the writing can bleed a little bit into business-book prose-land, but overall the information is quite useful.

About Face 3: The Essentials of Interaction Design

by Alan Cooper, et al. Cooper is the father of interaction design. This is the third iteration of his very substantial, essential tome that provides the fundamentals of how we practice interaction design today. Discussion forums on the IxDA.org site continue to go back and forth about many of the principles he puts forth in this volume, such as the use of personas.

by Karen Holtzblatt et al. The name says it all. Any UX designer worth their salt should have read the original tome Contextual Design

from many of the same authors. This companion volume contains all the methods necessary to carry out in-person interviews, conduct contextual inquiry, consolidate data into personas, conduct paper prototyping, and so on. If you need a working template of how to do user-centered design research, this is the place to start.

Want to share any of the books that you've been enjoying this holiday season?

Posted at 06:48 AM in Books, Creative Process, Inspiration | Permalink | Comments (0)