Texting Your Fridge Was Never Easier 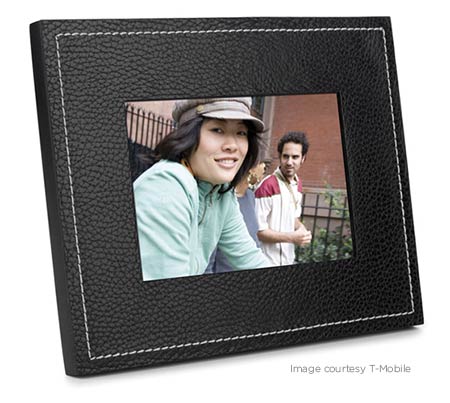 We're all abuzz about items that consolidate all of our media-related needs into one hand-held device, such as the iPhone. Or, alternatively, we geek out over those little electronic doodads that just do things more simply. The Flip camcorder comes to mind, capturing 13 percent of the camcorder market within a year.

These two trends are buzzing merrily right along. We drool over devices of both stripes accordingly.

But there was a dearth of coverage this holiday season about a technological doodad that is pointing towards a new trend in our innovation-led technodevice industry. And lord knows you could find it on T-Mobile's Web site -- they don't even feature it online.

What I'm referring to is the T-Mobile Cameo frame.

At a glance, it seems like a simple idea: take a digital picture frame, add an antenna and an active SIM card that registers itself with your local cellular network, and anyone can email or multimedia message a photo directly to the frame.

And maybe this device is a bit too simple for $99, plus a $10 monthly fee. The press have hammered on this device as being a little too geared towards technophobes... and it's easy to agree with them, because we're being offered very limited utility for the price. If I'm paying $10/month for something that sits on my desk, it should do a little bit more than passively receive photos. Maybe it should take pictures of me while I'm sitting at my desk, thinking of what to type next... and do I really want my friends sending me embarrassing photos that pop up when I'm having a dinner party? Thanks, but I think I'll pass.

But what really piqued my interest in this device was that it boldly questions the (semi-permeable) barriers between wired networks, WiFi networks, and cellular networks. The iPhone hops between AT&T's 3G network and WiFi ably, but can you say the same thing about your point-and-shoot digital camera? Or your espresso maker?

Let's put this another way: a major mobile carrier is looking beyond phones as a source of innovation in how people use their network.

This hasn't happened before, in quite this way.

This never-ending battle for newness results in all-out war from device manufacturers for our hearts and minds. And due to Moore's Law, these phones become old news within a matter of weeks.

But the carrier is laughing their way to the bank, since this device is ultimately just a conduit to the device manufacturer's network.

So, if you're paying your carrier monthly for network access, why not use the network for something other than your phone?

Talk about ballsy. It takes guts to say to the entire cell-phone industry, "Look, you guys have a good fight over whose phone features are better. We're going to make crock pots that text you when they're done cooking your chili." You'd have to pay a monthly fee for your crock pot to connect to the network, but if T-Mobile can get smart about how they enable everyday devices to communicate with their network, they could easily shift from a carrier to an real innovator. Once they have enough devices in their roster, they could offer a monthly fee for connectivity across a range of simple-to-use devices. I could text my oven to head up to 525 degrees, so I could heat up my pizza stone for dinner. Or synch up my Canon 40D to my parent's computer when I'm off in the boondocks.

Now, there's no way T-Mobile will succeed in this new venture unless they make every single item that they introduce to their network absolutely foolproof. But I think the road to success is in choosing those devices that already have traction in the market, and making them even sexier through mobile connectivity.

For example: If you could sell me a Flip HD camcorder that would immediately stream movies via your network to a skydrive, quietly clearing its Flash memory for another use within 10 minutes...

I think you get the picture.