Spotted on the Web: Hitchcock for iPhone 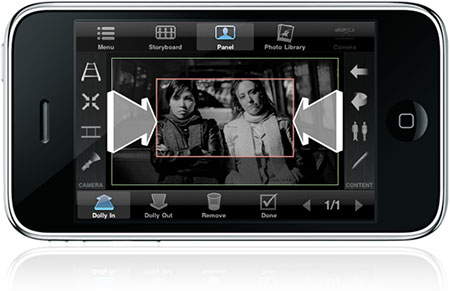 Hitchcock is a storyboarding application for iPhone and iPod touch. From photographs in your iPhoto library or on-the-go location shots taken with your phone's built-in camera, you can quickly built a multi-frame storyboard, animate it with voice over and pan-and-scan effects, then output the resulting frames to an annotated PDF for client review.

My friend Wes Kim tipped me off to this app right before it entered the market this weekend, and I'm very excited to start using it—but not quite in the way the designers intended. While this app is first and foremost for filmmakers—especially those involved in producing 30-second spots and short films—I think there are some ways that I can use it for creating user scenarios and for pre-visualizing shots at photo shoots.

As an example: If I was looking to sketch up some fairly complex user scenarios that showed people interacting with a system, I could stage quick photographs of people arranged in the correct orientations in photographs through Hitchcock, output them as a PDF, then hand-sketch them (via pencil or traced in the computer) with my initial storyboard serving as a visual reference. (The program lets you throw in outlined people or draw on the boards (in a rudimentary fashion), but with the lack of a comprehensive people-outline library, I'm not so interested in using their pre-made symbols unless they get more sophisticated in quality of line and character.)

Setting up for a commercial photo shoot, though, is where this app could really sing. When pre-planning a complex shoot, especially on location with a ton of props, I can pre-shoot the desired shots and immediately output them as a storyboard for my client to review off-site. This app only lets you create landscape orientation shots, so if you're planning any vertical shots, they'll show up horizontal in the storyboard. (You're out of luck if you want to shoot square.)

The price may seem a bit steep at $19.99, but for what it can accomplish in terms of optimizing a designer's workflow, it's easy to justify the purchase against saved billable hours. And I can only imagine the creativity it's going to unleash for other iPhone app designers and developers. It's (currently) rare that you would find such a professional-grade tool on your phone.

Check out the official site and demo video for the application at http://www.cinemek.com/hitchcock/.

Posted at 07:17 AM in Productivity, User Experience | Permalink | Comments (0)