The Blind Man and the Cheeseburger: Form and Interconnection in User Experience Design 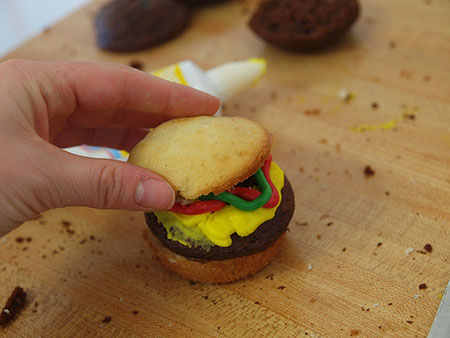 Have you ever watched a blind man eat a cheeseburger?

Before I skipped town for the holidays, my wife and I tried out a new sandwich shop down in the Ballard Blocks. After ordering and sipping at our iced teas, I noticed that the man next to me, distractedly chatting away with his family, had a folded white cane by his side. The waitress set down his gourmet burger, including sweet potato fries with aioli on the side. Out of the corner of my eye, I couldn't help but watch as he ate.

First, he patted with his left hand to find the top of the burger. He used his right hand to enclose the bun and patty. Slowly, he brought it to his mouth for a bite. Freeing up his right hand, he patted the plate for fries and ate three. Resting the sandwich, he then fumbled a bit before acquiring his beer and taking a healthy sip. The worried expression that had consumed most of his face during those first moments of eating had turned into a smile of deep satisfaction.

Between the beer, the burger, and the fries, he was continually reacquiring the position of each object in relation to his hands and his mouth. As he grew comfortable with the position and taste of each thing, he started to become more adventurous. Those first savored bites turned into a messy ballet. He began dipping the burger into the aioli for the fries, which required holding the stainless-steel ramekin. He also couldn't control how much of the sauce ended up on the burger (which ended up daubing his chin). As he finished the fries, he moved his hand around the plate in a clockwise motion to locate those last stray, delicious tubers. And he carefully managed how much was left in his pint of beer, so he could chase the last bite of the burger with a healthy swig.

As our waitress left our burgers in front of us, I couldn't help but reflect on how I would eat my impending meal, and what elements truly composed it.

We could talk here about the latent usability of the cheeseburger, but that's an easy argument to wager. If you suffer from a visual disability, of course it will cost you more time to fulfill the same interactions over the course of a meal. We've felt the very same feeling in using a poorly architected website, where we fumble about for minutes for what seems, in our minds, to be a very simple goal: match the idea in your head to what's on the screen. You need the food in your hand before you can put it in your mouth.

Since I could see all of the ingredients on the plate before me—and understood how they all fit together into a set of graspable objects—I could plan out at some level of detail how I would eat them, from first to last bite. It took about twelve minutes for the blind man to eat his burger, while I could make mine vanish more quickly.

Those are nice things, if I care about being more efficient, not getting ketchup on my sleeve, or admiring how the dark diagonal burn marks demonstrating how our veggie-burgers had been char-grilled.

Since I can see the cheeseburger, there must be some added meaning to the food that changes my perception of how it tastes. There's also the notion that slowing down the eating process, whether through self-will or eating in pitch darkness a la Dans le Noir, causes us to appreciate the nuances of what we taste. That environment may force you to acknowledge taste without the influence of sight, but how I understand the notion of "cheeseburger" or "fries" in that environment, as I consume them, is no better or worse than the blind man as he reaches for what comprises his lunchtime meal. Even if he and I are splitting the same cheeseburger, it will never be the same cheeseburger.

How can this be? A thought from Shunryu Suzuki comes to mind, from his lectures on the Sandokai:

"We do not make much distinction between things that exist outside and things that exist within ourselves. You may say that something exists outside yourself, you may feel that it does, but it isn't true. When you say, 'There is the river,' the river is already in your mind. A hasty person may say, 'The river is over there,' but if you think more about it you will find that the river is in your mind as a kind of thought. That things exist outside of ourselves is a dualistic, primitive, shallow understanding of things."

I used to think that, as a designer and a somewhat creative person, it was my calling to bring form to things I saw in my mind. In the creative act of making things, people would understand my thoughts and feelings through the work, in perfect translation. We would shape things with our hands based on notions of utility and delight, and provide them to others for repeated physical (and mental) consumption and use. If well-crafted, it would fulfill a clear human need.

Now, I feel quite different. The act of form-giving is not a means to a clear end. Our senses continually map and remap in reaction to the elements that order our physical world, harmonizing those perceptions with the world we construct in our minds. Neither is more precise than the other, or "real" in any standard sense of the word. Physical form and thought of form, messy, human interplay: yin and yang. A direct quote from the Sandokai:

All the objects of the senses
interact and yet do not.
Interacting brings involvement.
Otherwise, each keeps its place.

How to read this? What we create as designers lives within a tangled web of context and interdependence. We both see things as they are—discrete objects—and simultaneously as systems. Those systems are both constructed from what exists in the phenomenal, touchable world and within our scattered minds.

This is one reason why I find it so attractive when I hear thinkers like Robert Fabricant say that for those who call themselves interaction designers and user experience professionals, "Behavior is our medium." This is also why I love conducting usability studies and embarking on ethnographic research out in the world—because what I see, touch, and feel around me are part of other, more complicated stories that I can't fathom without encountering the rivers (or cheeseburgers) in other people's minds. This forces us to live, and design, with some sense of humility.

But we must avoid the trap of rationality in our practice. Designing for behavior does not equal simply thinking about problems in words and wires. We must make things tangible in time and space to measure their worth. We have to create our arguments through artifacts in order to be effective.

David Malouf framed this notion well in a recent post on Johnny Holland, where he said, "The cerebral nature of our tasks with lack of tactical results are not just merely easy targets for redaction, but also hold less value empirically: unless they are bound within forms." Otherwise, it's all talk.

We spend time in the craft of making things to understand the effect of the world on our thoughts, and our thoughts on the world. And we can't afford to be dualistic about this. We need the thought of the river and the actual river. They are both separate and interconnected.

Malouf's piece reminded me of Donella Meadows, who was one of the pioneers of the discipline of systems thinking. In her textbook Thinking in Systems she brought up the following Sufi teaching story:

Meadows then goes on to say that "it's a good idea to stop dissecting out elements [that comprise a system] and to start looking for the interconnections, the relationships that hold the elements together."

These relationships are time-shapes for the mind—and they must be reflected in the objects of the world that surround us to make sense. You can't change the cheeseburger on the plate before you by thinking really hard about it… but you can change what that cheeseburger means to you, and the others around you, by how you eat it.

To have those interconnections, we must have forms. To grasp forms, we must understand their interconnectedness with the world surrounding them.

Otherwise, we will fill the spaces between designed objects with illusory meaning.