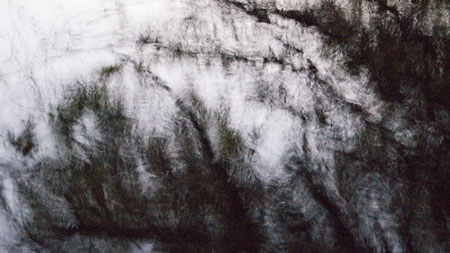 "Combinatory play seems to be the essential feature in productive thought." —Albert Einstein

An eternity of row houses: crumbling brick facades shadowed by rusted metal awnings painted over in a crackle of white, like giant bookshelves. A soccer ball rests in the yard, black dyed fabric panels scuffed away by Converse-clad feet scuffling across evenly measured concrete paths. Dull grey sky, lazy rain. I watch individual raindrops appearing on the windowsill, one by one, merging into larger and larger droplets.

In the back alley between homes, I can hear the chuckling of a car starter for at least fifteen minutes, over and over again—it woke me from a deep sleep. From bed, I strain my neck to look through the blinds, spying a fire-engine red Camaro, a man in a white wife-beater behind the wheel. Finally, the engine turns over, settling into a deep, saturnine roar above the constant pitter-patter of a cleansing rain. Engine purring like an overweight cat, the man eases his 20-year-old dream into reverse, slowly backs it up ten feet to block in his garage, which is overflowing with spare parts and packing boxes ever-flowing with everything from old blenders to scrap wood pieces. The engine dies.

I sit at the window, watching him stare off into space.

I gaze at the lake for at least 30 minutes. It feels like moments, or even seconds. The early morning light strikes the water, which is flowing north due to wind brushing the pines.

The calm in this place is reflected in my mental state, though below the surface, I'm sure my thoughts are darting here and there like tiny fish. Every so often, they poke at the surface, questing around to see if they can snap up an insect for breakfast. Needles keep falling from the trees, sap causing them to stick to my shoulders and nestle in my hair. Objects are just another kind of information, I reflect to myself, brushing them away with a little effort. Sticky, painful information.

As the sun crests the tree line, angling orange sunrays across the cascade of campgrounds, other people begin to rustle and stir. Zippers open with circular motions on waterproof nylon tents, dented aluminum pots clank as they are placed down on flame-kissed metal gratings, logs are thrown down onto nascent fires fueled with kindling such as last week's Seattle Times found in the trunk of a Dodge Caravan. Kids meander up to the bathroom, the clacking of their flip-flops resounding on the asphalt road leading to the top of Mount Constitution.

Today, I know I will eat food. I will pack up all of my things, stuff them into a backpack, place the pack into a car, and the car will return my body to my home, wherein I will be reunited with my wife after two days away. Everything else is conditional. Though you could argue that all of this is conditional. As the old Zen saying goes, "When the flower arranger arranges the flowers, he also arranges his mind and the mind of the person who looks at the flowers." The flower arranger must envision in the arrangement how the flowers will wilt, knowing that their stems have already been cut—that they are to be reunited with the earth in another form, like notes in a familiar-sounding song.

"A song can last long after the events and the people in it are dust and dreams and gone," says writer Neil Gaiman. Those songs, unfortunately, are languishing in in thick white karaoke songbooks. I have two of them in my lap: one organized by artist, the other by song title. They feel just as weighty as the abridged two-volume edition of the Oxford English Dictionary, which comes with its very own magnifying glass.

After much rumination, I decide to sing "The Reflex" by Duran Duran after downing my first and only drink of the evening. At the Rickshaw, they serve shots of bourbon in a pitted plastic glass, proffer terrible Chinese food to the half-drunk, and foster the camaraderie of karaoke every night of the week. The stuffing was coming right out of the naugahyde seats. The man currently on stage lacked at least two of the octaves necessary for nailing any song by Queen. The inventor of karaoke, Daisuke Inoue, probably had no idea that on an hourly basis, there would be so many souls belting out wobbly renditions of "Bohemian Rhapsody" in a plethora of languages before puking their guts out.

Meaning literally "empty orchestra," the blood-sport of karaoke is oft body without spirit, oft marred by mechanical performances requiring a human voice to provide any measure of feel. Self-validation and transcendence on a wobbly wooden stage. "The truth consists of hard to vary assertions about reality," says David Deutsch in a stunningly good TED talk. I'd like science to explain the truth behind karaoke, and why I was moved to tears by a rendition of the song "Jolene" from a woman so in tune with the meaning of that song, she probably could have taken American Idol. I'm puzzled why she isn't known beyond this small, rapturous crowd, which is staring in slack-jawed awe at her performance.

The woman behind the counter, responsible for selling each of us what is purportedly the most sustainably made shoes available in our world, is lost in her Facebook page. (Though I have to wonder—isn't being barefoot the most sustainable?) Due to her disinterest regarding my examination of said shoes, I will wander over to the display, touch each shoe in turn, and perhaps she will look up and see that I want to try on one of these pairs. This is a kind of magical suede-like fabric meant to mimic leather, but lacking qualities such as waterproofness or durability. They seem almost like clown shoes, except in earthen hues. I could be a Pacific Northwest clown with my SoHo soggy wet shoes.

The crowd in the store mills about, unsure how to gather her attention. Sometimes I worry that people treat the world like a kind of sudoku—as if we don't know the numbers, only which spaces awaiting our (possibly wrong) input. This is one of those meandering dances where we can cough and ahem and raise our voices and hope that our expectations are fulfilled. We will try on the shoes. They will fit. They will look amazing. Our significant others and/or passersby will remark how these shoes make us look 10 years younger, have a slimming effect on our ankles, they are worth every penny plus a 20% tip.

Earlier in the day, I had dropped my wife off at Poets House in Battery Park City, where she was meeting her Poetry New York class to continue their in-depth study of the New York School of poets (this week: John Ashbery.) While walking out of their gorgeous space, I stopped and glanced at their library, which numbers over 20,000 volumes. Caught with the glimmer of an idea, I began writing down every title of every book on a single shelf, in an endless sequence—spirit engine life under water what the earth cost us rivulets of light five to five love on the streets death's homeland slow news of need family values ka-ching big pink umbrella—until I'd filled a notebook page with author's last name De to Du. What had seemed, at first, like a silly experimental exercise, began to yield strange and provocative combinations, and I wondered how long it would take for me to continue this exercise—to capture every title of every book here. I gauged the wall in front of me, with more than a thousand new books from just 2010. The shelves extended far off into the distance. I did not know where to begin.

And yet here I am, a few hours later, I sitting with my single brown faux-suede tennis shoe on the only available bench at the shi-shi shoe store, waiting patiently to be served. Outside, the rain continues to fall.