The client ask seems innocuous on the surface: "Could you share with us your hourly rates, and how many hours your team will be spending on this website redesign by role?"

Whenever these kinds of questions come up, I can't help but think of my first efforts in making mole enchiladas.

Upcoming Events: AIGA Into the Woods, InfoCamp Seattle, IxDA Touch and Beyond

I thought I'd share some upcoming events and conferences that I'll be attending—and a few that I'll be participating in!

This free IxDA Seattle/Interact event will be a round-robin presentation of work featuring projects from: frog design, Hornall Anderson (HAX), T-Mobile Creation Center and Wirestone. All the projects will be focused on exploring the boundaries of gestural and touch interaction, grounded in actual project work. Space will be limited to the first 120 people to show up, doors open at 6:30 PM. More details here...

This unconference, focused on information architecture and user experience, will happen at Seattle University in a month or so. I'm looking forward to learning a ton from our local community, and also suggesting and leading a breakout session—which I hope to do as more of a collaborative workshop as opposed to a talk. Topic still TBA, but I've been mulling the subject of how to brainstorm interaction models...

This is a really cool and intimate conference, as well as a relaxing getaway to the Sleeping Lady Lodge in Leavenworth, Washington. It was a complete recharge of my creative batteries when I attended in 2007. I'm really excited to be attending this year's event and also having a chance to present the following workshop on Friday, October 15th:

Designing with the Body: If you want to find a great idea, it helps to start with a lot of them. David Sherwin of Frog Design will show you how to use techniques rooted in your physical body, elements of improvisational theater and other sense-based skills like taste and smell to generate new ideas for all sorts of creative projects. Get out of your head and into your body.

The presenters are not to be missed—such as Vivian Rosenthal from Tronic, Gail Anderson from SpotCo, Steve Frykholm from Herman Miller, and Alan Cobb from Albert Kahn Associates—as well as the other workshops through the whole weekend.

How Sending Postcards to Strangers Made Me a Better Designer 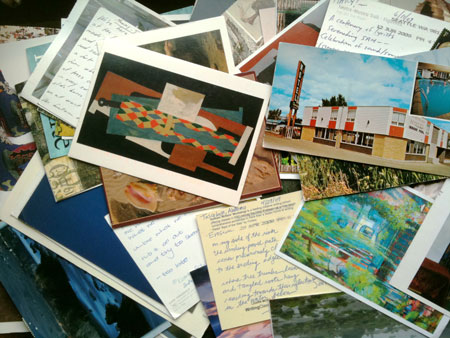 Something people with creative jobs always struggle with, myself included, is that creativity often likes to take its sweet damned time. We're forced into all sorts of habits and rituals that we feel will help us get to ideas more quickly. Totems of one such ritual sits on my desk: a pile of postcards at least three inches tall, sent from people all over the world. They serve as a reminder that creativity flows from well-considered constraint, married to daily discipline.

Being a Responsible Consultant

As the design community continues its slow evolution from a craft-based industry to a powerful pivot across lateral, yet related disciplines—such as business strategy and technology—we are often reduced to being hired to create artifacts first and foremost, crossing off item after item on the list of required deliverables in the contract we duly executed a few weeks back.

These are a few traits I've observed from watching responsible consultants working in our design profession. Feel free to add more via the comments.

Continue reading "Being a Responsible Consultant" »

The Panel Picker has gone up for next year's SxSWi conference, and I'd appreciate it if you could stroll on over and vote on my proposal for this year, which is a new talk with a different take on how interactive designers, developers, and UX professionals can come up with better ideas faster—specifically in the design of interactive products, services, and systems. Here's the abstract:

You're under the gun. Again. Only a few days to come up with a revolutionary new feature for your Web app. Or you've been tasked by your boss to give the company's new mobile experience a little more oomph. Or you're floating in the space of a nebulous client problem that you just can't seem to pin down.

In these situations, it can be hard to focus on coming up with breakthrough ideas. But don't worry—help is to the rescue. David Sherwin from frog design, a global innovation firm, will share tools and methods that any interactive professional can use to more consistently brainstorm quality ideas for interactive products and services. This presentation will be illustrated with examples from frog's interactive work and David's new book Creative Workshop: 80 Challenges to Sharpen Your Design Skills (HOW Design Press).

You can vote on the panel here. Thanks for checking it out!

It's Not Your Fault

There comes a time in the life of every designer when things go wrong on a project or in a client relationship. Horribly wrong. The kind of epic fail written about by Greek storytellers, passed down from generation to generation, then recorded to paper to give voice to Awfulness That Shall Never Be Forgotten EVER. Fear gives way to more fear. Your heart pulses in your ears. Adrenaline drowns out words being spoken (or hollered) at you. The knowledge of things going awry makes you physically aware of your body in a way similar to, say, jumping out of a plane. Careening downwards, a constellation of past efforts glitters behind you in the darkness, while your future career in design looms closer and closer, like the factories and empty fields that pock-mark much of northern New Jersey.

Now that I've got a few major failures under my belt, and enough distance from them to have sifted through the wreckage for a few tiny wisps of insight, I've realized that in some of those awful situations, I hadn't done anything wrong at all. It was entirely out of my direct control. I'm talking specifically about ongoing politics within a client organization—the kind of politics, no matter how strong of a relationship that you hold with your day-to-day contacts, no matter how many dinners and baseball games and late-night shenanigans at the hotel bar, you just can't suss out the bitter end until the room's been turned sideways and you're hanging from the chandelier for dear life.

Continue reading "It's Not Your Fault" »