Interaction 11 Recap: Thinking on the Outside 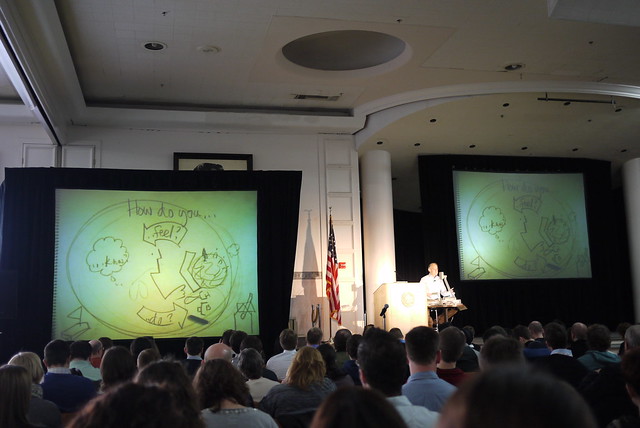 In early February, a number of frogs attended this year's Interaction 11 conference, sponsored by the Interaction Design Association (IxDA). Our time in Boulder began with a fresh blanket of snow and ended with all-you-could-drink absinthe at the closing night party. In my contribution for the conference, I taught a three-hour workshop called "Better Ideas Faster: Effective Brainstorming for Interaction," which focused on the unique tools and techniques that interaction designers bring to bear in translating research findings into actionable design concepts that cohere into large-scale systems.

This year's conference has been hard for me to summarize—not because of the absinthe, mind you—and in combing through my notes and reflecting on the experience, more questions have emerged than coherent themes.

One thing that became clear over the course of the conference is that the interaction design profession has reached a point where academic theory, professional practice, and an ever-increasing pace of technological invention has created instability within what many user experience professionals once thought was shared understanding. Or, to put it another way: we're spending more time trying to determine stable, common ground rather than realizing that we've built a bridge between disciplines over ever-flowing water.

Here are some of the reasons why I think this instability has come about.

We're not being tangible about the impact we can create as interaction designers. In discussions with both other designers, design faculty, and students at the conference, I caught an undercurrent of what I feel is a misperception around the service that interaction designers provide for their clients.

By this, I mean that we've unintentionally created a mystique around interaction design as a "thinking profession." To that, I say: what do we have left when you throw out the research results and the frameworks? What discrete touchpoints have fundamentally changed as the result of your efforts? How did you tangibly create that change? And what stories have we created that describe that change, both in the words of the audiences we serve and the clients we partner with?

We spend time with people, trying to understand how they perceive the world in ways that are similar (or different) to our own. One of my favorite quotes from Bill Verplank's keynote speech was when he said, "how to understand what people are feeling is to have them draw you a map." We work to know what people feel and do, then use that as the basis for crafting new products and services, supported by new metaphors. So first and foremost, interaction designers are crafting new metaphors for how we can better relate to other people.

These metaphors can be manifested through different types of material—and in the end, those artifacts are all that matter from the design process for end users. These metaphors are often derived from time spent with people, observing how they currently live their lives. We can create stories that embody these metaphors and better frame how our efforts influence our client's products and services, and ideally the world at large. These stories extend out of the design process, where such metaphors are forged. To quote Michael Meyer from his talk "Proximus Maximus": "If we're in the making process, we get to participate in that moment of creation. The little decisions and the big decisions. That means we have really great stories that we're able to tell."

However, we need to be careful that we aren't navel-gazing in crafting these stories. Outward-facing messages should be grounded in tangible examples and case studies, not every abstraction and edge case of the design process. In Carl Alviani's great talk, "What do you do, anyway?", he gracefully chided interaction designers for spending too much time talking to our ilk, steeped in our own jargon, instead of re-crafting our messages for the outside world. "The right story turns skeptics into evangelists… [and] every good story needs a recognizable character." Yes, a story is more tangible than just providing discrete data points, but even better than a story is directly showing the effect of something we've created on the world.

To have Carl's talk followed by speakers such as Tim Wood—whose 20-minute talk on "Scandalous Interactions" only served to underscore Carl's point that it is becoming too easy for our everyday professional dialogue to be inwardly focused and perhaps a bit too jargon-heavy. (Just ask your wife or husband what they think a complacency artifact might be.)

Talent from lateral disciplines are providing us with much-needed perspective. Compared to other craft-based design fields, interaction design is starting to move from elementary school days into full-on puberty. We have attracted students, designers, and developers from a multiplicity of related fields to jump into interaction design as a full-time gig. I was one of these people, and understand fairly well how much time and energy it can take to build up both a strong foundation regarding the history and theory of interaction design, while not discounting the years of tacit knowledge gained from fulfilling design projects.

Each of these people will be reframing the profession of interaction design through their own unique lens. This is supported by design's omnivorous, ever-roving focus as a practice and as a business. Richard Buchanan said in his keynote, "Design has no subject matter. This is our strength… we make our subject matter." However, Richard was quick to pounce on the lack of historical foundation for many of us—myself included. Instead of constantly reinventing the wheel, we can go read about how the wheel has been reinvented before taking another attempt.

All of us may have different views of the elephant that we call interaction design, but there were a few attributes that seem to be recognizable and universal. Brenda Laurel's stunning keynote, which I am going to go back and watch again (and again) when it's posted online, provides some clues about how we can do this effectively, with an eye fixed on the following factors: technology, action, actors, senses, culture, nature, and emergence.

We aren't encouraging enough active, participatory debate. While this was the first Interaction conference to include real-time, on the spot rating and commenting on speakers, I saw a lack of willingness for many people in the audience to actively challenge and discuss what turned out to be a range of perspectives. The Q&A sessions that followed every five speakers was a starting point, but because they were up in front of over 600 people in some cases, the forum wasn't too conducive for conversation or debate. And while following Twitter was a good way to gauge audience sentiment, it is a terrible medium to have really in-depth dialogue. Bruce Sterling's closing keynote almost felt like a catharsis, as he roasted the audience with what many of us may have thought over the course of the conference, but never felt comfortable vocalizing. Next year, we should.

Also, seeing articles like these after the fact, digging into important topics such as ethics in design was heartening. Plus, there were some fiery debates in the evening hours, but they rarely carried into the next day's dialogue. That is, except for the surprising amount of CHI-bashing that emerged from the mouths of multiple speakers.

We're still looking for the "silver bullet" to describe what we do. We still strain to find the über-definition of interaction design. Richard Buchanan's definition from his Friday keynote was heading in the right direction: "Interaction design is how people relate to other people through the mediating influence of product." The word "mediating" is a bit tricky, however, and I wouldn't share this definition with people outside the sphere of interaction design. Per the additional perspectives I noted above, we may not be able to find one definition to rule them all. Instead of punditry, we may need to find a closed set of crafted definitions that are appropriate to how we interact with our clients.

The instability latent in our profession right now is a very good thing, and the hallmark of us moving past our current plateau to richer (and more personal) understandings of how interaction design contributes to society.

But a question that kept ringing in my mind after the conference was: What would happen if we began to think about the profession of interaction design as a service to be designed? Can we turn the telescope on ourselves, and help support each other in ways that are further inclusive, and exploiting the strengths of the ever-expanding range of inputs we gather from lateral fields? Perhaps one of the perspectives we'll see emerge from Interaction 12 in Dublin next year is "Establishing the Touchpoints."