Home Archives Profile Subscribe
Details about "Success by Design: The Essential Business Reference for Designers"
"Beyond Craft and Tools: The Skills Design Students Must Master" on AIGA.org

Where the Roads Become Rivers 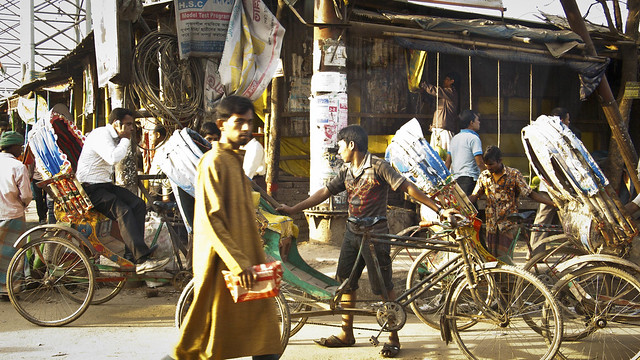 The rules of the road? There are no rules. Riding in a fast-moving car, the freeway is a fat, pulsing vein, and we are but one blood cell swirling through the body called Dhaka.

Oncoming traffic doesn't matter, since we can swerve into whatever lane is free to get there a few seconds faster. Right of way isn't important, because we cut off everyone else indiscriminately—three lanes of road packed five to six vehicles across at any moment with rickshaws, mopeds, cars, buses, compressed natural gas (CNG) taxis.

The man who was helping me find my way around joked that when traffic lights are green, you slow down. When they're yellow, you start to speed up. When they turn red, you drive as fast as you can. 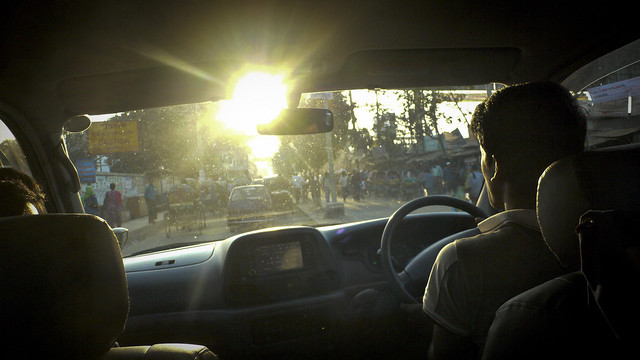 Sounds of the road: constant staccato horns warning of impending crashes in a language only locals can understand; strains of late afternoon prayer floating from mosques and prayer rooms; constant pinging of rickshaw bells; intense revving of engines when brief stretches of open road present themselves; painful shrieks of car bumpers on speed bumps that materialize from out of nowhere.

The air is thick with exhaust, oil fumes, plumes of dirt. When I blow my nose, the tissue is stained black. 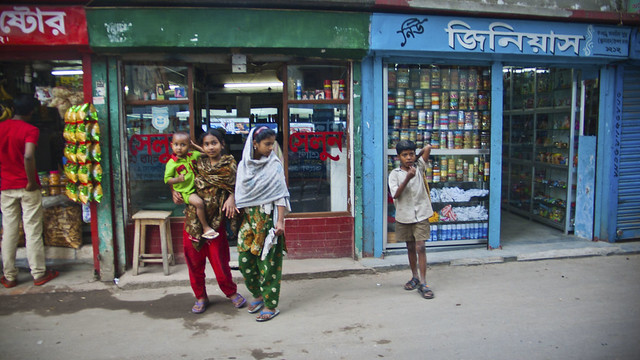 If you live in Bangladesh and want robust health services, quality food, access to clean water, careers for those who have gone to university, greater possibilities for entrepreneurship, better schools for your children, you go to Dhaka.

But with the lure of all the benefits the megacity may provide, the costs of gas, food, transportation, and housing are rising on an exponential basis, further deflating the taka, the country's currency. The district around the city proper of Dhaka has seen unparalleled growth over the past decade, doubling its population to over 16 million residents—most moving into the district from rural communities. 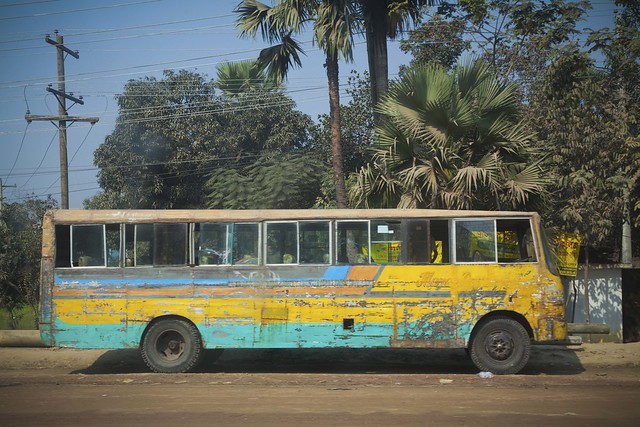 Peering into other cars, I see haphazard crates of chickens and rabbits strutting in straw; families of eight squeezed into a car designed for five; piles of narrow gas tanks in battered two-seaters; businessmen in striped suits behind chipped, tinted windows; military men in green-purple camouflage with rifles lazily pointed towards the sky; an entire backseat piled with mounds of bananas, jackfruit, oranges, and coconut.

But it's the buses that take most of my attention. Their sides look like flayed skin from a running child who tripped and fell on the asphalt. Blue birds painted above a landscape are gouged off. Names of transit companies are ripped away. Bright white, cyan, mustard, and cinnamon hues: fresh coats of paint mask the bruises, but don't make them go away. Men on the roadside wave their hands, they pull up and part with a few hundred taka. The buses fill up until men hang outside open doors, out of open windows, and finally, clamber to the top rather than miss a ride.

The people on the buses look at me as intently as I look at them. 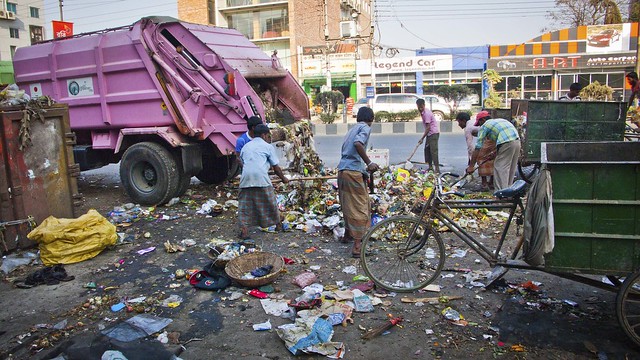 Just as there are no rules of the road, there is little clarity around the boundaries that sustain Dhaka. Much as a flooded river may reach its fingers into any embankment that sustains its flow, the city's efficiencies are eroding in ways that defy their design.

My Dhaka friends tell me this means that if there were any form of major disaster, such as an earthquake or a cyclone, the impact on the city would be catastrophic—and not just because of population density. It has to do with what people have designed to survive, rather than what might satisfy long-term plans.

An example from a CTO of a small software company in Dhaka: "Imagine that a textiles factory employs 3,000 people. When they build the factory, the owners don't install a fire exit. There is no one who can force them to do it. An earthquake strikes the city, the building is damaged, and no one can get out."

He lets this hang in the air, with all of its implications. 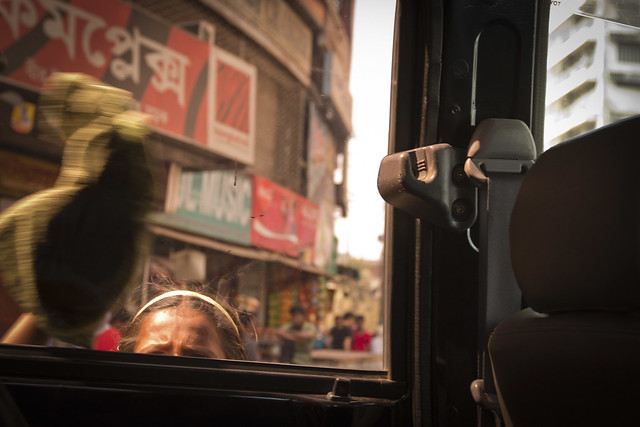 Children squeeze between the gaps between vehicles, selling the daily news, slices of carrots and cucumber in thin plastic bags, maps, and books. A man with no hands places his arms against our driver's side, peering inside to look at us. Women with hollow-boned faces tap on windows, some holding babies swaddled in their arms: something to eat?

An eight-year-old girl wipes down the windows and headlights of our car with a dirty cloth. "That girl loves what she's doing," a Dhaka resident says from the seat next to me.

"I don't think that's the precise word for it," I say. "Love." Perhaps she does this out of love, I think. The resident considers my words, says the girl likely cleans cars to bring money back to her family, to eat and have a place to sleep on the one day she doesn't have school… if she is able to attend.

The driver gives her 50 taka before the traffic unfurls. She darts to the median strip. 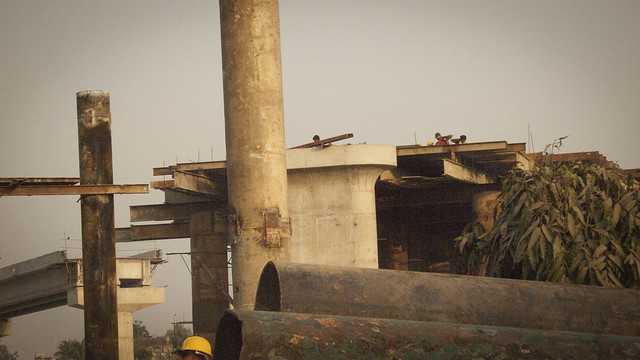 Dhaka is pocketed with ongoing construction: bypasses, overpasses, buildings, living domiciles, a university campus. Everywhere you look, you see the soon-to-be complete. The gaps are always visible in the city's infrastructure, from transit to banking to telecommunications, and the entrepreneurial are finding ways to fill them.

New services for wiring money to local post offices and bKash (mobile money services) are helping businesses and families better share their money without bank accounts. The availability of WiMax networks around the city provides people access to high-speed Internet without the need for physical wiring.

But on an individual level, the users of these services have to work the systems in order to make the best use of them. Cell phone users have adapted to uneven network coverage by purchasing multiple pay-per-use phones for competing networks. Business automation suffers due to the constant heat, humidity, and lengthy rainy seasons, which destroys technology. Perhaps destroys is not the exact word. Eat might be better. During the monsoon season, consume might even be more appropriate. 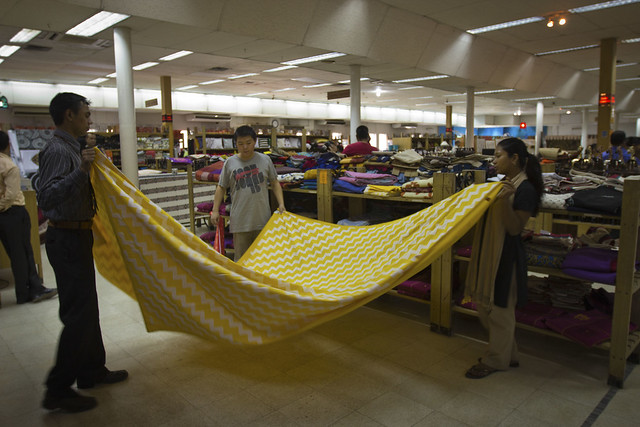 Dhaka's exponential growth is reflected in the the fierce celebration of Bangla culture both within and outside the city: in its language, poetry, dance, song, clothing, and crafts. Some businesses are built around curating this cultural output, such as Aarong, a chain of stores started by BRAC that brings together high-quality crafts, textiles, clothing, and other goods sourced from villages in Bangladesh. There is value that Aarong creates that could be replicated across other cultural industries, even though the richness of Bangladesh culture outside of Dhaka is what makes such a business model possible.

And a question lingered in my mind afterward for which I couldn't find an answer: How many people living outside Dhaka would be capable of shopping there? 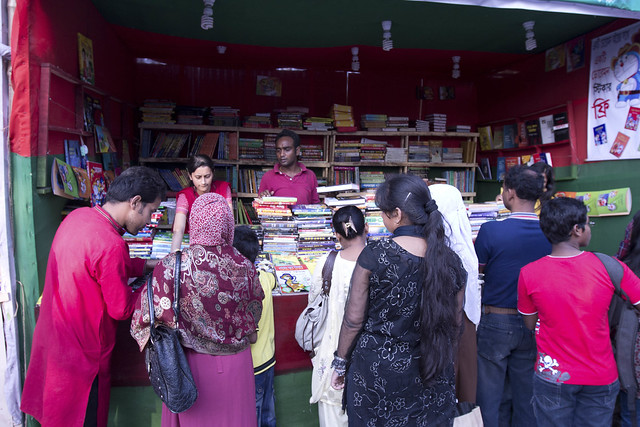 My last afternoon in Dhaka, I visit Ekushey Book Fair. It consumes multiple city blocks, runs the entire month of February, and looked to be attended by what I estimated at 50,000 people that single day. How often do you see such a throng rallying around the consumption of any literature, let alone literature only written in Bangla?

Leaving the bookfair, I talk with the software CTO. He asks me: "What was the most powerful observation you've had about Dhaka?"

"Why do you care about what I think about this city?" I say. "I didn't grow up here. I'm not from this culture. Wouldn't someone who's grown up here know it best?"

"You have to be an outsider to have an opinion about Dhaka," he says. "Many of us also moved to Dhaka—we aren't from here. And so much has changed in the past few years, that it's good to see the city through fresh eyes."

I think for a minute. "How small one can feel, in the midst of a city that is so large. Unlike any other city I've been in, you can't wrap your mind around it. And yet, at the same time, you have so much room to create your own path."

"I agree with that," the CTO says. Then he pauses, looks out the window. "But then again, you have to see rural Bangladesh to really understand Dhaka." 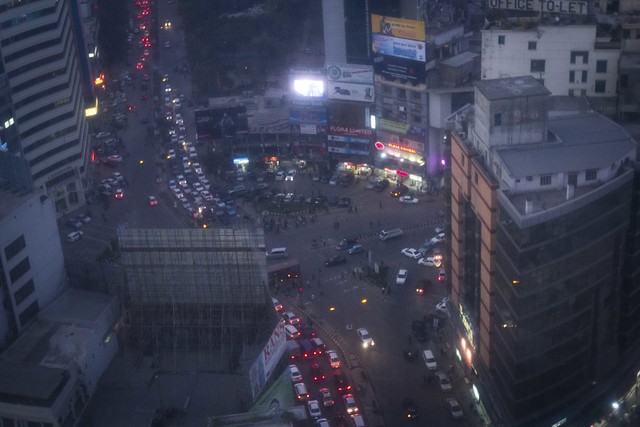 I keep returning to the behavior of a river when I think of my time in Dhaka. It has an ability to cleanse, to sustain, to transmit, and to display unwavering tenacity when dammed away.

I was only able to go a few hours outside Dhaka for a single day, and not far enough to fully escape the influence of the city. But even in those few hours, I was immediately struck by the sun shimmering off lush fields of irrigated rice and corn, expanses of water, the scale and space of the city inverted. All roads in Bangladesh may lead to Dhaka, but not the rivers.

Within inefficient systems are always the seeds of their long-term survival. You just have to grapple with the chaos long enough to sense where they will emerge. With patience, you can see what new channels the river will cut into the landscape, and perhaps follow them. Or, what is often more likely: see if you can divert some of that flow without disrupting the source. And when the monsoons come, you hold on to survive. The cycle continues. Within that optimism is a strength that can't be easily diminished.

I think this is why so many people see such promise in Dhaka's expansion. Standing alone on a dusty road, surrounded by millions of people, I return to the word promise in the same way that my mind returns to the river: the promise of a brighter future, the promise of what might happen tomorrow. Promise is a positive word, swollen with hope the way that the outer district of Dhaka is being flooded with people darting between cars, walking from home to work or school, doing their best in the sweeping current of the history of their rivers—and their country—to put back together what has been broken.