The Gift of Attention 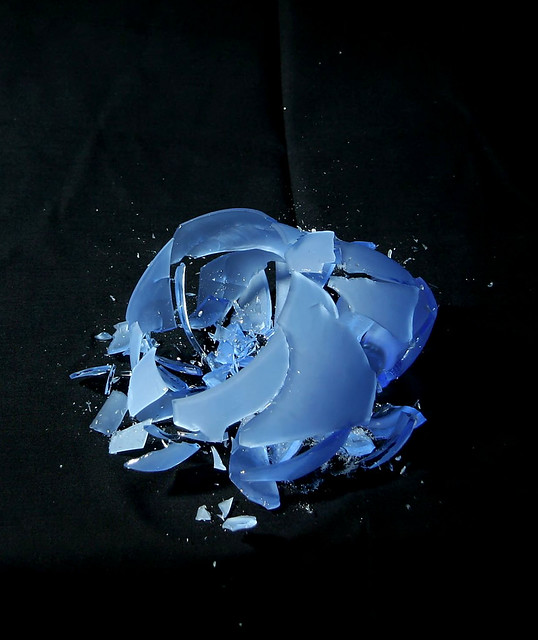 The water glass tumbled to the floor and shattered. Glittering fragments, both small and large, covered almost every inch of the bathroom floor.

A minute passed. Still in shock, I surveyed the tiled landscape from my maroon bathmat island.

My wife called out from the bedroom: "Are you okay?"

"Yes," I said. "It's no big deal." I had been holding a water glass in my right hand, which was also opening the door. In my left hand I was shutting off the alarm on my phone, which I'd accidentally set to snooze. I hadn't wanted to wake my wife up, but it was too late for that.

As my breathing returned to normal, I felt a throbbing pain in my right foot: two splinters of glass poking straight out from the skin, like mile markers on a jogging trail. Kneeling down, I plucked them out. Blood oozed from the wound.

"Wet a pile of paper towels and use it to pick up the fragments," she said.

I put my left palm on the counter and stretched out to pop the bathroom door open. Then I jumped through the door from the bathmat, so I wouldn't risk piercing the soles of my feet.

Outside, a garbage truck honked over and over again, so loud that it set off a car alarm.

I returned with the towels and thick-soled shoes. Leaning over from my waist, I did my best to pick up what pieces of glass I could see, piling them in a paper bag we'd saved from our last trip to the grocery. One of the larger fragments displayed a smiling cow, with a single word below it in handwritten script: "Moo."

Now, the work would begin. Since the glass was cheap, thousands of dust-sized glass pieces glinted from the tile. I wet the towels in the sink, squatted, and began to pat at the floor.

I knew that I had to reach every square inch, to make sure all of the fragments were gone. So I got on my hands and knees to finish the job.

It was only that moment that I realized the floor was filthy—even after having been professionally cleaned before we moved in. This went beyond the usual hair and dirt you might sweep up on a weekly basis.

With the 30 minutes I had before I needed to commute for work, I couldn't clean it to my satisfaction. It would take two hours. At the same time, I didn't know how I'd missed how dirty the floor was when we'd moved in.

Having lived with people who sleepwalk, I sometimes imagine what it would be like if I sleepwalked too: Staring into the mirror in the bathroom, brushing your teeth with shaving cream. Standing in the kitchen after having cooked and eaten half a stack of buttermilk pancakes. Gardening in the moonlight, watering a patch of blooming spaghetti squash. Walking down the center of a city street wearing only flannel pajama bottoms, plush squirrel slippers, and a coffee mug that reads "My Pomeranian Is Smarter then Your Honor Student"—then being woken with bewilderment by a honking Cutlass Supreme.

These moments, whether deliberate or unplanned, break our patterns of attention, much in the same way a Zen master may strike a disciple that has fallen asleep while in seated meditation. The master takes no joy in the act. It is not punishment. He bows to the sleeping discipline in apology for what he is about to do, to make sure the student can return to being present.

Such are these moments, where your actions provide you with such a gift. Did you already receive it?

After I cleaned up the glass and inhaled breakfast, I was standing at the corner of Grand and Lenox Avenue, waiting for the light to change. The clarity of the morning had dissolved into a swarm of thoughts. I was thinking about what I needed to do that day at work. About meeting my wife in Sausalito for a reading by writers that we admired. Dozens of thoughts, in the time it takes for a light at the intersection of Grand and Lenox to change.

A bicyclist shouted as he passed by me and another woman, "Wake up, you're beautiful!" He then whooped with joy and shot both of his fists in the air, balancing his bike between two fast-pumping legs.

The woman and I exchanged glances as if he was crazy.

But he was right. I wasn't there.

Above photo by Andrew Magill, reprinted via a Creative Commons Attribution 2.0 Generic license via Flickr.