A few years ago, I hated flying. I'd been deathly afraid of it since I was a kid.

I knew this was a completely irrational fear. I knew the odds: only a 1 in 20,000 chance that anything might ever happen to me in my lifetime. Compared to the odds of dying due to cancer or a heart attack, I had bigger fish to fry.

Flying was something I knew I needed to do, especially as I grew up on the East Coast and have lived on the West Coast for eleven years now. Whether to see family and friends or take off on an adventure, I'd have to fly. But whenever possible, I would try to avoid flying. Even for most vacations, I was content to stay in Seattle or drive to somewhere in the Pacific Northwest.

Last year, I had an epiphany that helped me to better understand this fear, and make some peace with it.

It was on a plane flight two years ago, commuting to Austin to help lead a work session. We were at that fulcrum point in the project, where you start moving from the initial immersion and research into full-on design. There wasn't any more work I could really do to prepare, or try to stave off how most designers feel at this point in the process: a mixture of excitement and fear.

I was staring out the window of the plane for a really long time. Just sitting with the discomfort: my fear of flying, blurring into my excitement for us to get there and start doing our design work.

At a certain point, I realized they were almost one and the same. Excitement, because we were about to create solutions that were going to help people in need. And fear, because we didn't know exactly what we were going to make yet. This fuzziness, in the journey we take when we work in a creative discipline.

When you get on a plane, it's really easy to imagine the journey. Through the magic of technology, you'll be thousands of miles from your home in a matter of hours. San Francisco to Boston. There'll be a crappy in-flight movie. Some peanuts and soda. Germs and crying babies.

My fear about flying was all about the reasons why we might not reach Boston, or Austin, or Madrid. And I realized those are some of the same hurdles that stand in the way of someone who wants to lead a design team.

When you're a design leader, you're the one getting on the plane for the trip and you're the one flying it. But it's not clear if you're going to Boston, Shanghai, Toledo, or some borderland between countries that no one has ever visited. Would you tell someone flying on a plane that's where you're going when you take off? A city that does not yet exist, with an airport that needs to be built while you're in transit.

This is the challenge for a design leader: making awesome s*%t real. You could argue that any designer is a futurist. But the best design leaders that I've worked with, the ones that inspired their teams to go far beyond what they thought was possible, were able to describe a place to travel that did not yet exist and say, "Go there." They didn't exactly know where we would end up. But they knew by attempting to get there, the right destination would emerge from the haze. That excitement and fear blurred together again, as we discovered where we could travel next.

The only risk is that where you're at in a project may not feel like a natural end. You would have to go somewhere new before you had a sense of the destination where you'd arrived.

That is the journey that we all take as leaders, and the vision that it takes to sustain that journey, trip after trip, year after year.

And you'll have the frequent flyer miles to prove it. 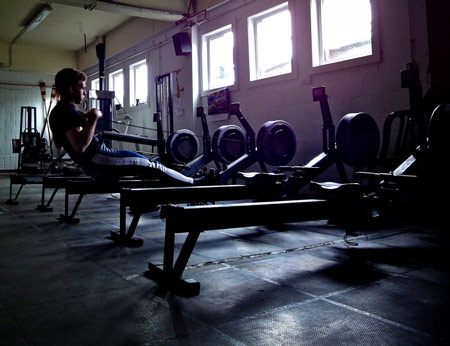 Four years ago, I was having a conversation with the head of client services at a large marketing studio, and somehow we ambled onto the topic of Buddhism. I mentioned that I'd been thinking about the similarities between Buddhism and design, and he said: "Well, then clients definitely make us suffer too."

We both chuckled at the joke, but there was a hint of wisdom lurking in the laughter.

We don't need clients to cause us to suffer. We do a fine job of causing suffering in our work without them.

To suffer is to endure, to carry forth in work and in life.

There is a constant tension between the constraints that bind us. Some are human needs: a roof over our head for sleep, food to keep us from starving. Some are more experiential, responsibilities we choose to acquire by studying trusted experts, emulating admired role models, or slogging through dogged failure. And in the domain of work we find daily tasks we hope to eventually align with our personal passions.

Sometimes we own the business, sometimes the business owns us. Or so we believe. All of our needs, responsibilities, and tasks become tangled up with the requirements and demands of business.

In late 2000, I landed a freelance gig at one of the top advertising agencies in America. I was thrilled I would be there for a month; I wanted to gain experience in creating high-end advertising. And though I was spending most of my time creating layouts for dog food ads, I was gleaning insight into how a large agency operated, as I had spent the previous four years working within small nonprofit organizations and design studios.

It was late Friday afternoon, and I was packing up my bag to leave. Out of the corner of my eye, I saw other designers from the production studio lined up outside the office of the creative director.

"What are they doing?" I asked the designer sitting next to me. On his screen were mechanicals for a newspaper ad that was going to run as part of a client's next campaign.

"Oh, they're getting feedback on their ads, to see if they need to come in over the weekend and work on them before they're sent out for publication next week."

Without even thinking, I blurted out, "Why?"

He paused to think, then leaned over and said to me quietly, "If they offer you a job here—and they will, because they like you a lot—decline it. You don't want to work at a place like this."

Earlier this week, after seeing some Olympic rowers on the TV, I ended up in a conversation about what it was like to row in an eight-person crew. First, the painful memories came flooding back. The training was intense and grueling: running 3 to 6 miles, doing weight training, doing sprints on the rowing ergometer, stretching, plyometrics, constant racing on the reservoir where we trained. It was the most extreme cross-training I've ever experienced. I once had to run backwards up a hill carrying my friend Brian on my back. All of this work, in the service of shaving a few seconds off the speed of a boat carrying eight sweaty men floating on the top of a river from Point A to Point B. I recall races where several of my teammates would end up puking into the water, because they had simply pushed their bodies too far. Seeing people doing crossfit, even after all of these years, makes me shiver.

But those memories were counterbalanced by the thrill of rowing itself. What you may not know is that those rowers are flying.

Once you've been rowing with a crew for a month or two and you've achieved a certain level of synchronicity, each time the oars dig into the water, the boat rises slightly above the river's surface. Months of hard work are made manifest: the boat flies through the air, if only for a few microseconds.

I think I only know this now that I’ve stopped rowing, but the saddest part about the whole thing is not about how much you’ll punish your body for those brief moments of freedom. It’s knowing that once your oar leaves the water, the boat will cease its flight. And though there may be another stroke which allows you to fly, eventually, the race comes to an end. Project complete.

I can't say that everything in life functions like this. People go a long way, sometime without even realizing they’ve passed their limits, to reach that moment of effortlessness in the midst of intense work. Outside of the oars and the boat, nothing else matters. Not eating, not sleeping, not friends or family.

But a life solely composed of work is like a house without flooring to stand upon. For too many years, I applied the same sporting logic to my design work. I believed that the intense suffering—the physical and mental sacrifices—was the necessary and expected effort I made in order to fly.

This was reinforced through word and deed by designers I greatly respected, some of whom I considered mentors. They said the key to success was a single-minded focus on creating excellent work. So I tried to do that, for a really long time.

After all, rowers don’t need to see where they’re going. They always have someone else looking forward for them.

The upshot was that I grew as a designer. I’m grateful for the knowledge that I gained during that time in my life.

The downside of this focus was what I'd excluded. I found myself spending more and more time with designers, talking about doing design work—often while avoiding a pile of life problems that couldn't be solved by writing a better proposal or having a killer prototype to solve a client need. I avoided those problems by digging into my team’s design work, helping others with their problems.

My fellow designers and I were all in the same boat, pulling and puking together, and we couldn’t afford to be concerned about what lay ahead. We could fly consistently together, maybe a little longer each time. When one race was over, we just went to another.

We might have caught a glimpse of something important on the shore, but only after it was passing us by. We were working.

We were working hard.

The above photo "'Powerzaal' bij Club Gent"/7158757302 is by E. Dronkert from Flickr.com, included via a Creative Commons Attribution 2.0 Generic License.