I Looked Greatness in the Eye, and Decided to Look Elsewhere

This is a guest post by Mary Paynter Sherwin.

A good friend of mine, along with roughly half of the Internet sites I visit, provided me with a link to the application to be Rich Silverstein’s executive assistant. I’m writing this letter to provide an administrative assistant’s take on the application tests, because I respect the amount of honesty displayed in your tests about your requirements. I also wanted to write about why I find the application one of the more disheartening things I’ve encountered in my career as an administrative professional.

First off, I’m dismayed by the number of people calling this application brilliant. I’m also dismayed by the number of people insulting Rich Silverstein by calling him names. Accolades and insults both ignore how honest you are being about what you want and what you deem acceptable. The whole thing speaks to how we view and engage in constructive dialogue about the place where we spend a third of our lives.

Is the application brilliant? Yes, at first. The underpinnings of some tasks are ingenious and informative. And as a branding statement, the application certainly caught the attention of the press. But in your search for the right assistant, you serve up some ugly insights about the acceptability of certain behaviors and attitudes in advertising, about corporate culture, about the cult of personality, about teamwork, and about respect.

The application isn’t funny. It’s dead serious. Here's a test-by-test analysis of how I read things:

1. Pencils
I need to be able to tolerate mundane tasks. I also need to be an adaptive thinker. Even the most straightforward task may have another solution. I can either sort the pencils by eye or check the source code. And if I know how to check source code for color, that knowledge indicates all kinds of things to you. Is the source code reliable? Probably. Making a legitimate case that a good assistant can’t be colorblind would be tough. 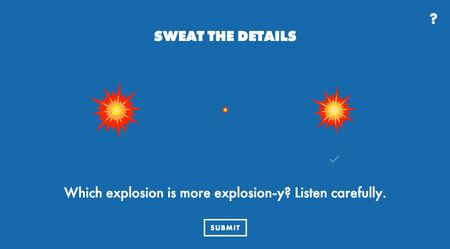 2. Explosions
I need to be a hearing person for this job. The test tells me to listen closely. So sure, I need to listen to the entire thing to get the right answer: you’re looking for a demonstration of my patience and engagement. But this test is also a good measure of how much general knowledge I can exploit. If I pick a particular explosion, I should be able to explain it based on something more than my gut. Can I bring everything that I’ve learned so far in my life to bear at my job, even if it doesn’t seem related to advertising? Because that’s what advertising people do. 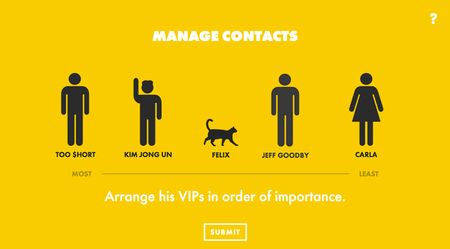 3. VIPs
I need to have a decent set of researching chops so I can find out that Carla is Rich’s wife and that Jeff is Rich’s business partner. But how do I organize them? This depends on my own principles, because I haven’t met Rich yet. Do I look for some interviews with Rich to see whether he values business over family? Or do I just express my preference for family over business, or vice versa? Great test. However, if you can come up with a snarky webpage response within minutes of getting sassed by @BetaRish for not having this application available on mobile, you can probably switch Kim Jong Un for someone whose ex-girlfriend wasn't just executed by firing squad along with eleven of her coworkers, ostensibly for making a sex tape. Did I mention that their families were required to watch? Either you don’t keep up with current events, or you do but don’t care because advertising should be edgy. Neither option is appealing. 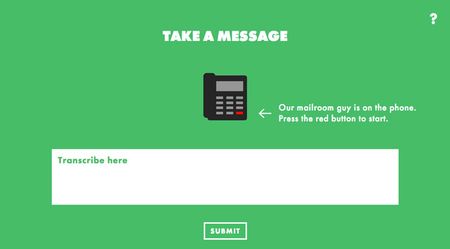 4. Mailroom
I need to not be a bot filling out this application, and I need to be fluent in English. This test is also where you may lose a few more candidates, because we’ve got different priorities about how to get the job done. If I can’t understand a message from a fellow employee, I’m going to call him back. Curious, though: there’s no option for “Demonstrate follow-through and engage fellow team members to prevent miscommunication by either calling Mail Room Guy or walking down the hallway to talk to him.” 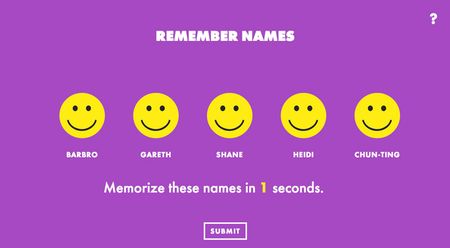 5. Names
I need to have a really good memory. The best way to remember people’s names is to match them with their faces, because you don’t see how people spell their names when you meet them unless they’re wearing nametags. Oh, but the faces are all the same! The test doesn’t represent how we meet people and remember them. Like the other tests, there’s something else at play. The variety of names in this test can show you how much exposure I’ve had to other cultures, where people’s names aren’t always Tom, Anne, and John. If I want this job, it probably helps if I’ve been outside of my backyard two or three times. Or if I know how to take a screen capture. 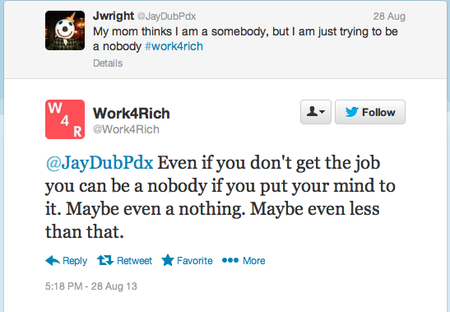 6. Twitter
I need to sell myself in a tweet, which proves that I know how social media works. I’m not certain why you need your assistant to be able to pitch, but perhaps this is also about thinking fast.

I went over to @work4rich to see what other people were saying. I needed to check the market. And the more I read the feed, the more I realized that the Twitter test told me more about what you’re looking for in a candidate than all of the other tests combined, because it’s checking my ethics. And this is where I got sad about the current state of affairs.

I’m surprised at the number of candidates who equate being a good assistant with being mean, or more bluntly, being a bitch. Not surprising, sadly, is how many people still seem to think it’s ok to treat an assistant as less than a person, that it’s ok to view people as tools and cogs, or that it’s ok to joke about any of those attitudes. @work4rich, while dutifully responding to seemingly everyone who imperfectly tweets about why they’re perfect for the job, doesn’t do a lot to combat this. Each tweet from @work4rich enables and reinforces those attitudes, simply by their tone and approach. Those tweets show anyone who’s listening that… hang on a minute.

If I’m supposed to believe that you’re using this application to actually find viable candidates, then if I didn’t make my exit with the VIP test, I’m completely out now. My experience as an assistant, and I don’t think I’m alone in this, has been that we’re supposed to be essential, yet invisible. Assistants usually don’t tweet about their bosses unless it’s part of the job description. We get paid to have strong boundaries. The Twitter test runs counter to this.

Your application, and especially the final Twitter test, tells me exactly who you’re looking for. Goodby, Silverstein & Partners wants an EA who is willing to go through the fire in order to get a job. You’re saying you want an advertiser, not someone who knows about advertising. You want a candidate who has a sense of humor about bullying. You want someone who has no problem being in a culture that excuses public humiliation if people aren’t snappy enough or strong enough. You’re saying that you want someone who thinks nothing of compromising her privacy and the privacy of her boss for the masses.

If that’s what you’re looking for, you’re doing a great job. I applaud you for your transparency. If only what you were showing weren’t so savage.

P.S. I did not finish the tests. But I do have a tweet for you:

"@rich4work I wish you the best of luck in your search for an assistant. #honesty"