Home Archives Profile Subscribe
Envisioning the Balance: Gauging the Growth of Design-Led Startups
10 Books to Challenge You in 2014 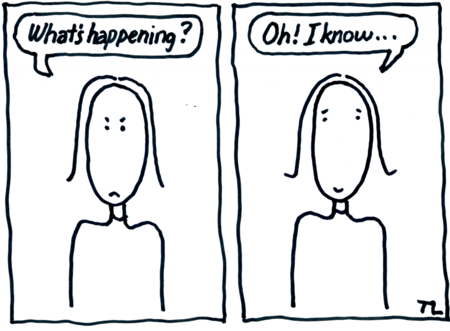 This is a guest post by Ted Leonhardt, who helped me out with the "Negotiation" chapter of Success by Design: The Essential Business Reference for Designers. Ted has a new book that just came out called Nail It: Stories for Designers on Negotiating with Confidence, which takes the topic much further and extends from client interactions to salary negotiations, promotions, and job interviews. Nail It was released first this month as an e-book through Amazon/iBooks and will soon be in print, so check it out!

Logic is great for analyzing what went wrong after the event. But it’s not so great for creative and emotional moment-to-moment decision-making. When you’re in the heat of it all, logic is hard to hang onto. Understanding how to move from being dominated by your emotions back to your logical side is critical to success in stressful situations.

You’re negotiating the biggest budget of your career – up to now anyway – and your client Fred says, “we just got a bid that’s half of yours.” Wham! You didn’t even know that there was a competitor involved. Everything just changed!

You’re surprised. All of a sudden you feel your heart beat in your ears. You’re caught unawares. Maybe you’re a little embarrassed, caught in front of your team who – you told you had it in the bag. You’re certainly reassessing your relationship with Fred, who just blindsided you. As this is swirling around in your head, you’re feeling a little queasy too.

You know from experience not to respond in the moment, but it’s hard not to let your disappointment, outrage and, perhaps fear of loosing, reduce you to your inner child. Always a bad idea.

Earlier in your career the half price claim would have completely focused you on price and how to lower it. The client’s claim reframed the meeting from a high level discussion, to down and dirty market bargaining. In effect, you’ve just gone from attempting to achieve lofty mutual goals to haggling over a used car. That’s a natural kneejerk emotional reaction to being hit by surprise. It changes everything in a heartbeat.

Instinctively you want to hit back: “What? You said we had the project, that we just needed to work out the details. What’s going on?”

Or, again instinctively, the role-over reaction: “Well, I guess we could take a look at our pricing calculations.”

Both reactions are completely understandable in the heat of the moment. They are like fight or flight. Both are focused on the price objection and lead to the same place: less money, less respect, or worse, the loss of the project to the half-priced competitor. Both reactions are driven by your feelings in the moment.

I always thought that with experience I’d no longer feel the tug of emotions overwhelming my rational self. That these feelings would no longer plague me when I grew up. Sadly that hasn’t happened. But I have learned that when the emotions are running hot and heavy it’s a signal by myself to myself that: first, what is going on is important; second, I’d better pay attention; third, I need to step back and get a little space on the subject. I may need to just take a deep breath or I may need more time. In either case it’s the reminder to not react that’s important.

Because emotions are so powerful you must prepare in advance to deal with them.

In my experience the most important preparation is the simple recognition that these feelings are normal and can happen at any time. I call this the “take your head out of the sand” step. I used to simply pretend that these feeling didn’t exist. I’d go bravely into negotiations actively suppressing even the eventuality that I might react emotionally. The result of this maneuver was surprise and poor reactions every time my feelings did get aroused. Not good. But, by recognizing that my emotions could rage prepares me to logically examine and rationally deal with them when they do.

Second, have a list of questions prepared that are both general and specific that you can refer to in the heat of the moment. A quick glance at your list can give you the needed tip to get past the narrow issue at hand, shift the context and get back in control of yourself and the situation.

Third, remember your accomplishments and credentials. Don’t forget that you were invited to the negotiations because of your skills and achievements. The client needs you to help them–you are an expert–you have high standards and always deliver as promised.

All we know is that Fred has cited a half price competitor after indicating that we were already selected. We could say, “Fred, we’ve put our budget together to achieve what we understood to be your goals. What would you recommend?”

Often our opposite doesn’t have the authority to move forward and does not want to reveal their hidden constraints. “Have I misunderstood something about your goals, Fred?”

Think of these neutral, non-challenging questions as the first steps in unraveling what is really going on. Think of them as a part of your investigation. Make sure Fred understands that you see dealing with his half price challenge as new information. New information that properly investigated, will lead to a mutually satisfying result.

You can always ask my favorite question, “Fred, help me understand how you’d like to move forward.”

Using your natural emotional responses to inform a rational response will serve you well at the bargaining table. It sure works for me.

Article illustration by Ted Leonhardt. This article was first published on Branding Magazine.