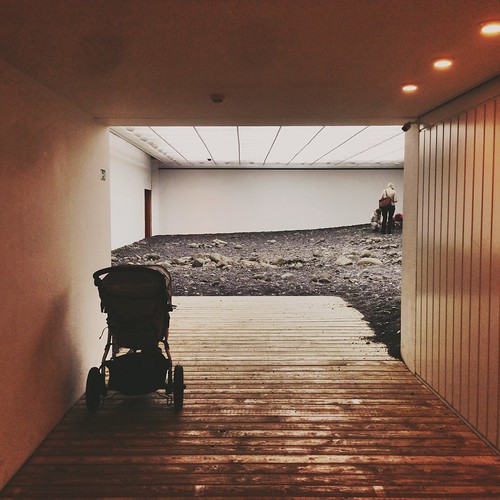 The toddler in the snowsuit slipped on a rock and slid into the burbling stream. His mother pointed at him, laughing to her two friends standing beside her. I thought: I’ve never seen that happen in an art museum.

We were inside the first room of Olafur Eliasson’s Riverbed, which was on display at the Louisiana Museum of Modern Art outside Copenhagen. It was part of a series of situational artworks where natural landscapes were partially recreated within the environment of a gallery space. The year before, Mary and I had seen Lava Rocks at a museum in Aalborg, where we had to don a pair of museum-provided Crocs and gingerly step our way through a giant white room full of sharp red lava rocks. The combination of the crunch-crunch-crunch sound and light streaming in from the windows above made for a static non-terrestrial landscape, as if it were Mars from the legs down, while from the waist up we were within the environs of a hospital. 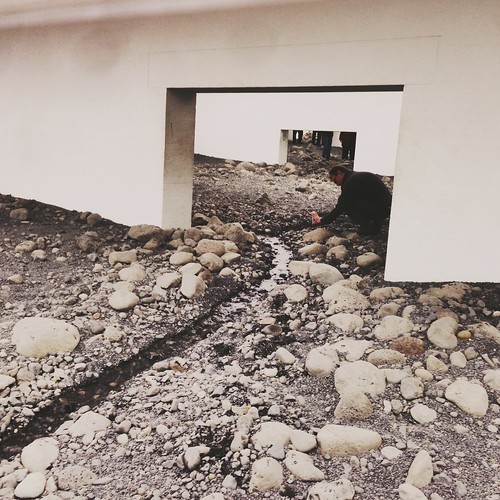 But while Lava Rocks’s primary modes of engagement required us to stay focused on keeping upright as we explored the various terrain in the room—lest we injure ourselves—Riverbed was set up in a slightly different way. First, the artwork moved through a series of rooms, and the floor was graded as if you were hiking your way up a hill bank to find the source of water. You could duck through short doorways to move in and out of the rooms, as if the gallery environment itself had been reshaped by the natural material. You climb a staircase that has been overtaken partially by a trickling waterfall. In most rooms, the only sound you could hear was the rushing of the water downhill, which was so pristine I found myself searching the walls and ceiling to see if there were speakers piping it inside. The only thing the exhibit required of us, other than the ability to walk, was to cross the stream in order to view every room. 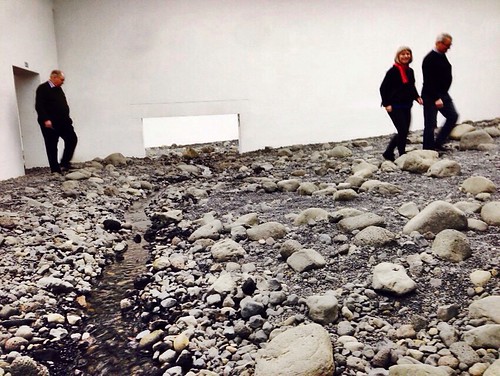 What struck me most about this work was what it lacked. In Lava Rocks, I found myself considering how the rocks were birthed from fire and cooled into these shapes, and imagining myself in those environments. In a similar fashion, when experiencing Riverbed I found myself considering what you might find exploring a local stream: wind, sunlight, dirt, animals, insects, birds, plants, trees, lichens, fungus, worms, and all else that animates our natural world. All that was left here were the water and the rocks, and the sense impressions that they would leave us as we ground our way up the sloping room, with an inkling of what we would find at the start of the stream: the end of the work, and the beginning of your recollection of the experience.

I found this re-creation of nature both constrained and expansive. I call the work constrained because the interplay between the gallery space and the raw materials (rocks, water) was intelligently assembled to evoke a few physical and sensory interactions—Eliasson meant for the destabilizing nature of the rocks against shoes, for example. But I call the work expansive to speak to the almost unlimited vocabulary of things people can and will do, based on how the environment was constructed. I couldn’t help but wonder how much thought had been put into the arrangement of natural materials as to how it could inspire these interactions, which rarely happen in an art exhibit. In just a few minutes observing those at the exhibit, I saw: 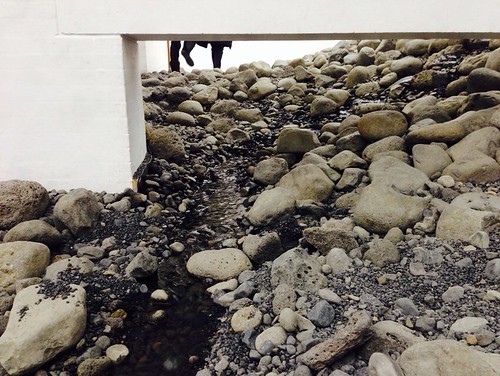 In an interview, Eliasson talked about how he would watch these people, and then try to literally recreate their movements, “so I can see what I have lost.” His perspective is that he can only control so much of someone else’s experience—and that the whole notion of him dictating an artistic experience is flawed:

“The interaction we have with our surroundings is actually a cultural construct. The way we engage with the world is based on our model, not on truth… What I also present you with is not real. It’s stones on wood. So I’m not trying to say I’m trying to show you the real thing. We are living in models and that it is always how it is and how it has always been… What is real is the way that you choose to handle your own model…

We don’t take in the exhibition, we produce it by walking through it. That is to suggest that the authorship of reality lays within the beholder, the user, the museum visitor. The museum is constituted by the visitors… [That’s why] we should trust the visitor to take the authorship, to become creators.” (transcribed from a video interview associated with the exhibition)

In this case, the child who was producing the exhibit alongside me was starting to cry, as he had gotten wet and the water was chillier than anticipated. His mother swooped him up off his feet, as six more children in a school group bounded past, giggling with excitement. In a world where so much contemporary art places demands on you to sense something quite particular or precious, it’s refreshing to spend so much time in an artistic experience where you are able to shape your journey so explicitly.